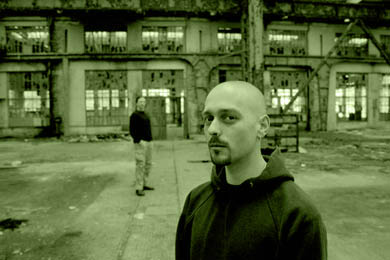 Please tell us about your album, "Tranquil Places", and which songs have the most meanings to you?

Manu: "Leaving home" is very deeply connected with us personally and with the band history. It's about leaving my old house in the countryside for moving to Leipzig. This house was the place where we have done the first half of the album and we were living there together for a few months. I really didn't want to loose the place, but I wanted new energy and a change for my life, so I made this decision and the last months there were emotionally very intensive.

Greg: I like "Welcome to the World", I often see the world like this. Only the profit counts, each one of us has not much to say. Big global enterprises, industrialism, etc. "Leaving Home" also means a lot to me, but in a different way than Manu. When I grew up, my parents often moved to another place, so I repeatedly had to "leave my home".

Please share with us, some of your backgrounds in the musical and non-musical world.

Manu: Greg learned piano at a young age and later was playing bass in various bands. Then the first computer came and he was lost into the world of electronic sound. He is a freelance professional in 3D animation and film, has done dvd productions and image films and is also teaching this at a college in Hamburg. I was learning drums from the mid eighties, played in a lot of pop and rock bands and also classical ensembles. But at a certain time I was also lost into electronic. There's nothing sexier than a good electronic sound. Take the bass sounds of Alan Wilders Recoil project for instance. Wow. I am very deep into drone music, experimental, ambient and some industrial. I was educator and music therapist, but quit the job and now freelancing at the moment.

Now this is very cool---you've done remixes for Anne Clark, Funker Vogt, Implant and Dope Stars Inc, to name some. Please share with us how that got started? Any others planned?

Manu: I did my first remix in 2004 and then it got more and more. It's great because you can concentrate on the sound and structure, the song is already there. As Underwater Pilots we did some cool things, I specially like the Dope Stars mix. And as Xabec (my solo project) I recently did mixes for Orphx, Hecq, Polarlicht, Mnemonic, Dnn and lots more. Greg and me also did a whole remix cd for Floating Stone, it is a sideproject of Anne Clarks band. This was very interesting, cause the originals have been pure acoustic. I still love the mixes. We got in touch with Anne cause I was the co-producer of her current album "The Smallest Acts Of Kindness". At the moment there's no remixing planned, we have to finish the second album first.

If you were asked to make a salad, say for a party, which one would you be making? Pasta, fruit, potato or veggie? And what kinds of food did you add?

Manu: Vegetarian for sure. Hmm, maybe pasta salad with fresh herbs, garlic, a bit balsamico, maybe some fresh radish-sprouts and olive oil of course. And lots of chilli. And maybe grilled tofu slices! And by the way... man, how I hate it when this meat fascists take their meat-contaminated spoons and move around in my vegetarian salad. I hate that kind of stuff.

Greg: I prefer pizza to salad. So maybe I'd make a sort of pizza salad? Never tried it. Could be funny, with little grilled garlicbread pieces, lots of spices, and of course tomatoes. And whole basil leaves. Ah yes, and no chilli for me ;)

Manu: I once tried spaghetti on pizza. But I made a mistake - I put the spaghetti on top, so they where hard in the end. You definitely have to put cheese on top. That should work.

You've just been given exclusive free range to invite family, and a few friends for six days, staying in a hotel suite where each of the six nights, a movie "theme room" of your choosing had been authenticated. Also with you, are three musical artists (of your choice) who'll be performing two-sets each night. What do your theme rooms look like, and who are your musical guests?

Manu: Oh man, that's a serious question. Forget the movie thing and I want no room. I want open air. A lonely big meadow in summer, warm sunny evening, surrounded by forest absolutely away from the world. And then I'll play a show with Mari Boine singing, Sting on the bass, John Zorn on the saxophone and I'll sing and make strange noises and cool industrial beats with my machines and my Curetronic modular system. This could be nice. Or I'll show up with 10 guitar amps and 5 drum machines, 20 distortions and delays. This is the band. And in front I have Rollins. Only 10 huge amps, electronic and Rollins, yeah!

Greg: Yes, open air is great. But let'Ṁs assume the hotel has a huge room. And lots of good-sounding, not oversized speakers all over the room. Not a big PA, I hate loud music in closed rooms, it can't unfold. On one of the evenings, I'd have it decorated like "Solaris", maybe with lots of big screens with the surface of this amazing planet in the Movie. Or maybe 3D-projections ;) Lineup: Sidsel Endresen (Vocals), Alan Stivell (Celtic Harp) and Klaus Schulze (Synths) The next evening would be really outdoor, in a Forest with huge Trees, like in Lord of the Rings, where the Elves live. Decoration also like this. The Artists playing together would be: FreQ, Cosma and Simon Posford. In fact, this evening would last for 6 days. But as I can choose only 3 Artists... poor Guys ;)

Manu: Hey Greg, I take the solaris thing but with the elves from Lord Of The Rings, this sounds very nice!!

When do you find you're most creative; and do you have a special place to help bring out that creativity with more clarity?

Manu: I think for me it's very important not to stand still. Sometimes I have to walk, or make a little journey. Go to the mountains and be alone. But then I have to return home again into my livingroom-studio. It is the difference between two extremes or two states of mind what gives me new energy, itÂṀs not only this or that. I have to structure things and then loose the structure, have to work on music and then let it "sleep" for some days. I always need this big dynamics in a short interval.

Greg: For me it's a bit different. IÂṀm not making music all the time, and can't just switch the creativity "on". I need a few days until the flow gets back, but then it's cool. And when it's flowing, everything that disturbs me or is getting me out of the flow is not really welcome, that's the difference. This summer we had a nice time in the mountains near Dresden, surrounded by huge rocks and trees. And no city-noises. Fantastic. And no internet. Even better ;) But only 12 days. For me it could have lasted for two or three months... It is one of my goals in life that one day I'll work 9 Months of the year and then have three completely for music. Oh, and I'd have holidays in that 9 months part, of course ;)

What comes first in your creative process of song making? Do you hear the melodies or feel the lyrics? Or do you go back and forth?

Manu: Oh that's very different. Mostly there's a beat, a sound, a melody and the lyrics in around. But sometimes it's the other way, first the text is there with a story creating a specifc mood and then it leads into the music. But more often it's the first way I think. Sometimes in a later state of the song it goes back and forth. There may be a word, or a rhythm in the vocals wich needs a reaction from the music and so.

As team collaborators, what have been the most difficult compromises to been made, regarding lyrics and music? How do you move forward, when something you'd really wanted to be considered, is not mutually felt?

Manu: Yes this things happen quite often. We had cool songs with good vocal melodies but I had absolutely no idea for a text. Ha! What to do? We had songs Greg liked but I said "hey this is simple computer game sound". We had good lyrics but Greg said "this is too dark, I can't identify myself with that". We had a good song but I said "this does not really rock, it bores me". As far as there are enough songs like "Welcome To The World", "Leaving Home" or "Rely" and "Everything", which will be on the next album this is ok. It is part of the process and a process is work. You have to hit this points before it releases flowing energy again. It's life, we have to live with that.

Greg: That's right. And when we work on new songs, we put "placeholder" lyrics in them, to have a rough idea how to arrange the songs. Of course it is then very difficult to create the final vocals, having heard the placeholders so often... And as we are not living in the same town, and we both have a "normal" live, it gets even more tricky to get to a result! And sometimes we feel or interpret a whole song in a completely different way, we often have different opinions on how it should sound. Then talking helps, we find a compromise, and when the song still works, well, thats collaboration. If not, it's computer game music. Well, not really. But maybe we should try ;) The hardest thing is to speak about it without offending, and of course not to take offense.