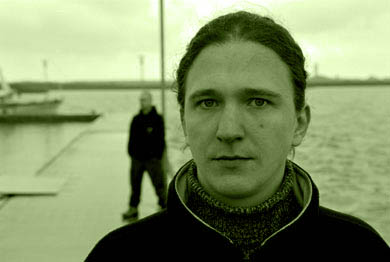 Your kind of music is considered dark and industrial in North America, but in Europe it's considered more mainstream. How do you view it yourselves?

Manu: Yes I know. For us here Industrial is something very different. I think our music is a blend of electro pop with psy-trance and ambient elements. Sometimes I call the new songs something like "headphones electro". We love sounds.
Greg: Personally I'´m not sure about any category we can be associated with. As Manu said, we love sounds. And thats the point. We do not try to fit in a category, we are happy when some people out there like what we are doing.

What kind of live setup do you have? How does it differ from the studio lineup?

Manu: Just Greg on the machines and me on the mike. In studio we both do the production.
Greg: Yes, I use a really reduced setup on the stage. Only what I really need, and what I can take with me in an airplane. In the long term IÂ´d love to have a Drummer with E-Drums, and more musicians on the stage. Question of money, of course... but we'´ll see.

Are you doing production or remixes for other bands as well? If so, when are they out?

Manu: We did a complete remix album for Floating Stone (released 2006), remixes for Funker Vogt (2005 I think), Implant (2006 maybe) Dope Starts (2006?) and Anne Clark (2008). With my solo project Xabec I did some more and in some parts Greg was also involved: Polarlicht, Anne Clark, Orphx, DNN, Flint Glass, Contagious Orgasm, Hecq and much more, a mix for Typhoid will follow up soon.

The synth-pop genre has really grown in the last few years. What kind of influences do you have on your music today and in the past?

Oh man. Peter Gabriel, Porcupine Tree, Freq, Neubauten, Steve Reich, Esbjörn Svensson, Mari Boine and a million more from various styles. We really do not care about borders and styles and are extremely wide open for music from various genres.

What kind of gear do you typically use? Software? Mac or PC?

It's quite compact. Live Greg uses a Mac Book Pro with Cubase for sequencing, the Virus Ti and I have just a microphone, that's it. In the studio Greg has got his Mac Pro, Virus Ti and some additional like Reason, I use Logic on my Mac Book Pro, Motu, Virus, Curetronic and Doepfer modular synths and Roland System 100. We also use Ableton, Ohmforce- and Native Instruments Software.

Was there any decision to have vocals in German over English ever? Or is English the standard for music in general it seems? We can't tell because we all speak it over here anyway.

Manu: I think English is the standard. We thought to do some German vocals on the second album now but we're not sure. You'll see later this year!

How did you first hook up with Funker Vogt guys and then Van Richter in North America?

We sent some demos to Repo Records in late 2002 and then in 2004 they released "Tranquil Places" in Europe. They tried to spread our music around and for North America we are working with Van Richter and for Russia with Suyuz.

Lyrically, where do your ideas come from? Is the inspiration the same for the music? Is it coming from the same place or written independently?

Manu: Vocals often have topics which touch us personally. Sometimes a bit dark, when I am happy I mostly feel no need to write. The lyrics definitely have to touch me, sometimes it's personal things, sometimes political topics. Sometimes the inspiration for lyrics and music is fed by the same source, but mostly not. We are working with the sound and the song and try to follow the way the song asks us. Then vocals come into it and from that point song and vocals or lyrics can inspire each other. There's no typical way.

How do you feel about MACOS and its ideas? (Musicians Against Copyrighting Of Samples) Are you for or against this?

Manu: Never heard about MACOS but some other things like it. 20 years ago we were copying vinyls onto tapes. Now a days we're converting mp3s and can do digital lossless copies. The point is not the possibility of copying or easy use of samples. The point is the awareness. Awareness that a good sample, piece of music has to be made. Composing good songs and producing a CD sometimes takes years, hundreds of hours of hard work, equipment and money. Who does not respect that is killing music. If you use samples to transform them into something new, something on its own that's fine, if not, it's a rip off, then you suck
Greg: Neither have I heard about MACOS in that way, for me MacOS has a different meaning ;) Sampling is great, and I feel like Manu. Doing creative work with samples is cool. It always depends on what you are sampling. Using a sampled beat, put through a bit crusher or so, yes. Using harmonic elements and melodies, well, then it gets tricky. Common sense, I'd say. Stealing is uncool, that's for sure.

What an we expect next from Underwater Pilots? Do you have any live shows coming up new remixes or tracks?

Manu: We are working on a new CD, we have about 12 new songs, most stuff is nearly ready to be produced. Our second album was planned much earlier but we had lots of other things to do. Greg was doing some DVD productions and I was busy with producing Anne Clark's album. So we have some years in delays. In 2009 we'll finish the CD and I think we have some very strong songs and a very good sound. Much more our own thing, more trance, less Electronic Body Music. More Underwater Pilots. Greg: You can expect more albums. There is a German proverb: "Gut Ding will Weile haben" (A good thing wants its time). "Tranquil Places" was first released in 2004, the second one in 2009. Thats ok. We'll continue. Next one in 2014? No problem. Could be earlier if lots of people buy our music, so we would not have to earn our income from "normal" jobs. For live shows we'll see what 2009 brings.