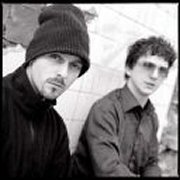 Hi there, and welcome on our pages! Since Underwater Pilots is a very particular band, could you give us some more information about your birth and the concept behind this project?

Greg: Well, the Roots for Underwater Pilots started to grow back in 2000. 2001 can be named the Birth date of the Band. Our intentions where (and are) to make good Music, influenced by both of us. Maybe you know that Manu also has an Ambient Music Project called "īXabe"Âī, but his musical background is far beyond Ambient Music, really awesome. My influence for this Band is the Trance-Part. I love repetitive Music. I love moving Pads, wich, combined with electronic beats, have a really strong influence on my feelings.

"Underwater Pilots": why did you choose such a particular monicker and what is it referred to?

Greg: Even if we searched a long time for a name, the result is quite simple: Both of us have a great affinity to Sounds-Pads. For us, it is comparable to flying, sort of a weightless feeling. And though most of us can'īt afford a trip into real space, the closest feeling we found was to dive. Everyone who experienced the feeling of being underwater will know what we mean.

Your music is composed by some very different elements and styles: from electronic to pop, from to dark to industrial, so how do you write your songs?

Greg: Well, basically we start by an Idea that comes while playing with some sort of Music Equipment, combined with an Emotion we have in that Moment. Then comes a long way... Evolving such an Idea can take weeks, or even longer. We try to feel what can gain the Emotion in our Idea, how to pack it into a Song, whilst keeping it interesting.
Manu: Sometimes, not all the time, my part is the heaviness and dirtyness. Greg likes to control every sound and I like the result. But I also like uncontrolled random events wich have an own life and character. In this case I represent the experimental and industrial music.

Give some more information about your lyrics: what topics are you dealing with, usually?

Manu: Most of them are very personal, emotional problems. I couldn'īt write about happy things because mostly then I don'īt feel the need to write. In the new material wich will be released in 2009 there are some kind of positive lyrics, but at least the feelings have to be intensive, no matter wich direction.

You called "Tranquil Places" your first album but we find a crocodile on the front cover! So I guess this place is not too tranquil, isn't it?

Greg: This depends on the point of view. Most of the Time, a Crocodile is really calm. And it depends on the point of listening... Listening to the Album with Headphones on a Sofa, IÂīm sure that not only us can chill. But heard really loud it develops a completely different Energy.
Manu: The title is also related to the place where we started to work on the first album. It was the house I was living in, close to the forest, very calm and secluded. But at this time I already knew I would move to Leipzig, so the period was filled with joy and loss.

Anyway, what are the feelings you would like to provoke in the public that listen to your songs?

Greg: Freedom. To slow down the life a little bit, and to think rationally about what happened, and where we would like to go.
Manu: Rationally? Music has to overwhelm me, I like to be taken away, I don'īt have a rational feeling. I want to get lost, dive, fly. I feel this as a journey and sometimes when I am back again, I feel clear, yes. But I don'īt know why it is like that and I don'īt ask. Music has to catch you and if it does so, the listener is responsible for the rest - everyone has got his own film.

What are your main musical influences and your favorite band of all times?

Manu: Sting, Neubauten, HÃĪndel, Pink Dots, Anne Clark, Biosphere and a million more. Also a lot of Drone Music, Trance, Jazz, Industrial and Prog-Rock. I don'īt see borders between music and sound, noise and all-day-sound of environments. I guess I am extremely open for a lot of stuff.
Greg: For the Bands, it'īs difficult to say, they are just too much. My musical Influences are settled somewhere between Debussy and PsyTrance.