Testify are a great metal/industrial band from Germany with their 3rd effort ready for release on Van Richter this month. They are ready to take on the U.S. airwaves and win over the audience to their aggro-industro metal sound of "MMMYAOOO", which is their best effort to date, hands down. Thanx to Paul A. of Van Richter and INK 19, I got to interview Moses (guitarist) of one of the best upcoming metal/industrial bands since Ministry. They are angry, they are TESTIFY!

(Moses calls, I'm reminded of how far he is by the cool accent.)

TOMMY T. Hello, Moses, great of you to call. First of all, why don't you tell us who Testify is, and where the band is located?

TOMMY T. O.K , and please tell us where you are from.

MOSES We're coming from Germany which is an industrial region, so we're doing industrial/metal. Of course, Essen and Dusseldorf are the bigger cities in Germany and that's where we come from.

TOMMY T. Well, your new album is ready for release on Van Richter this month. Let's hear all about it, the title, and the direction of the music.

MOSES The title is a strange word pronounced "Mmmyaooo". It's taken from a fantasy book from Terry Pruchard. I love Terry, and our main approach was to combine more musical elements of dark metal with the industrial stuff we had done in the past. We wanted to bring the musical elements of the guitar and drums out more.

TOMMY T. The new album, "Mmmyaaoo", shows a lot more growth musically and lyrically. Was it the most serious and hardest effort yet? How long did it take?

MOSES Well, it was a very long process. It took us one and a half years to work and record it, especially the very last song, "Quest of Nothing", which is a dark ballad. It was a long time to get that one exactly the way we wanted.

TOMMY T. Yes, I noticed the darker, heavier, and yet melodic songs all created a more diverse, more intense album. Is this the direction of Testify for the future? 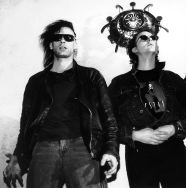 MOSES Yes, and I think we will develop this more. I feel a lot of industrial bands face the problem of their artist work is too simple. They use the same guitar and drumming, very basic, which is O.K. for one release, but for us in developing for the future there must be more musical changes, and our next release I think will take us one or two steps further.

TOMMY T. Moses, are you the newest member of Testify?

MOSES Ah, no, I've been with them from the beginning, but I was a guest musician. It was a funny story because there were other guitarists who were real Testify members who had problems doing it in the studio, and there were several tracks I had to re-record for them because they were out of sync and cue and I did them well. And after the first release, we decided to go with this combination. It works.

TOMMY T. All right, so what is the connection between Testify and the Fair Sex (another great industro band on Van Richter)?

MOSES Testify was from two members of The Fair Sex, Myk and Rascal, that wanted to do something different, more fast, harsh and loud, and that was the birth of Testify!

TOMMY T. What influences, musically, made you want to play music?

MOSES Personally me, I'm a metal head from the beginning. The first moment I heard Kiss, if it wasn't for Gene Simmons and Paul Stanley, I wouldn't be a guitar player. Also AC/DC, Judas Priest, and the electronic bands were Ultravox, the German band Kraftwerk, Garry Numan, and most of these first inspired me from the day I began music.

TOMMY T. Yes, those are a lot of mine as well, good combination. So when can we expect to see a Testify tour of the U.S.?

MOSES Well, I've been talking to our label an hour ago and the guy (Paul) is trying real hard to realize the whole tour thing. The best thing would be to find a good package to make it best for all fans. It should happen in late summer/fall, but nothing is on yet, or set, so we'll see.

TOMMY T. Hopefully, the album sells good and we can get you in by popular demand.

MOSES It must do so, it must!! 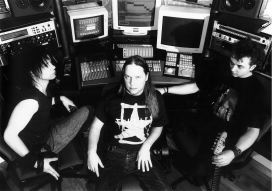 TOMMY T. I don't know if I should ask you (I thought this would be with Myk), but does Testify have their own dictionary that you draw some words from? I mean, it's cool, but what inspires the weird words you sometimes use?

MOSES I know about the brain of Myk Jung. He loves reading all types of literature, fantasy, which is also one of my pleasures. Also a fan of strange comics and fantasy, I think that's one of his main sources for antitypical lyrics and antitypical words.

TOMMY T. On the new CD you have a more guitar dominated mix. Is this a more metal sound that the band is going for? Maybe a little more metal, less industrial?

MOSES For me, it's much more metal than in the past. The reason is the first album was done more by Rascal and he is more electronically styled and sequence, and I'm more rooted into the metal style so I'm writing more straight off a guitar or bass line, and the industrial and sample sounds are worked out later on.

TOMMY T. What bands do you like from the American scene?

MOSES I really don't know too much, but I hear there is much more now going on in the U.S.A. now, but I don't know. I guess I'll stick with the highlights - Ministry and NIN. NIN played live in Germany and was a great event. And Ministry's new album, I was really astonished, I can not say I love it, but I love the last release.

TOMMY T. Lyrically, is there a theme on the album, or musically?

MOSES Actually, the music is the only straight line, the lyrics are all different. He uses some of the fantasy on song 1 "Pink Goblins", is a story on its own and others are different. "Quest of Nothing" deals with the question of life and what it is, so it's all a little different each song.

TOMMY T. Are you involved in the Fair Sex? Are you a member?

MOSES No, I played on their last record on song 1 "White Noise", I believe, but it was only as a guest musician.

TOMMY T. I'm gonna let you go now so you don't have the large bill to give to Paul. So thanks for all the great music, and keep up the great Testify works. Hopefully, the support will build up for you guys. The new album should turn a lot of heads.

MOSES Thanks a lot, goodbye.

MOSES What do you want? Oh, last words. Hey you fuckin people, I love you and I love our new album, and maybe you will too, bye!!