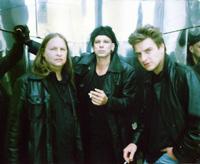 What is the Fair Sex? When did that band start and how did Testify emerge from it?

The Fair Sex started in the middle eighties - creating a kind of electronic Dark Wave sound, or so. Testify emerged from this round about 1992, in order to lead us back to our original (philosophical) roots of more wrathful attitudes - a path that TFS had abandoned forever, as it will seem.

Where does the music come from?

I wonder what you might mean. Where the Testify music come from? From out of our heads, from out of our dissatisfaction that needs being articulated.... The guitar riffs are the offspring of our guitar players doing their tiny bit on their instruments. Those riffs are being sampled, as all the noise-atmosphere stuff, put together in the domain of Cubase, together with artificial drums - until at the very end the whole stuff is being performed live with a real band.

You guys have a reputation for, lets say, not being serious, during interviews. Do interviews bore you?

This question alarms me a bit. I'm afraid that our style of not the most serious way to do interviews has met some critics recently - misinterpreting us, as I fear, that we might take our interview partner not too serious, which is wrong. We are glad about the opportunity to do interviews. But indeed - already in the first beginnings of Testify we have established our slapstick interview style, perhaps to do something different and focus interest - perhaps only in order to disguise that we ARE being boring, in fact.

How did Crack the Mind come about? It is a best of, how were the songs chosen? Who does some of the remixes?

Crack The Mind is not a best-of thing. It contains five all new Testify titles, and four remixes of songs from MMMYAOOOO, the predecessor album. Remixers were Die Krupps, Die Warzau, Plastic Noise Experience, and Skyline Dave. The choice of titles was brought about by us, and Van Richter, I think.

The European press seems to make a lot out of the fact that you guys are influenced by Ministry. How has the US reaction been, seeing as we invented Ministry?

The US invented Ministry? That astonishes me. I always thought that they had invented themselves, being individuals and so. Now to your question: I was not aware that the European press stressed that particuliar comparison. I thought anybody would do so. So for the next album we have a new strategy: we will try to sound like Ministry in order not to dissapoint anyone.

Perspective recently gave you guys a strange write up. Did you run over their dog or something?

The Prospective interview done by Niclas Nylund? Hm... I have not checked this out yet. It is strange, for he appeared to be one interview partner who seemed to get along fine with our slastick style. But that exactly is the danger! Especially if you are totally bereft of success, as we are. Due to this fact the result is not too unlikely that somebody might write: They are so arrogant, so convinced of themselves. Their jokes are exagerated. They think they are soo important - whatever. This is what I suspect concerning Prospective. But I have to read it. Perhaps he has different reasons to give us a strange write up, as you state it. But I am sure that we did not run over his dog.

You've stated that 1989 was a low point because no one seemed interested in your music anymore. What changed that?

Are you a big Sweet fan? I happen to think they are one of rocks most misunderstood bands.

Personally I'm not too fond of that band. And it was not my idea to make that cover version. And I think the result was of inferiour quality. Perhaps Sweet were misunderstood. Do you mean by that they were not as ridiculous as their outfit make us believe nowadays? That indeed might be.

How do you see the band fitting in with the current electronic music explosion? Or does that even matter?

Is there a current electronic music explosion in the US? We are too far off, and here in Europe the mixture of various styles that is alive since 1992 or so is still present. In fact this will not matter too much for Testify. We will not change to EBM or Techno or Synth-Pop or whatever.

What is a live Testify show like? Do you have to perform behind chicken wire?

In Europe there are no chicken wires. Testify live is mostly a dirty aggressive Industrial rock show or however this might be defined. With a far greater natural touch than in the producing procedure. We like that difference in working.

Have you toured the US? I know other German bands (like Haujobb) have had visa troubles.

We have never toured the US, except for some interview activities. Probably we would get visa troubles.

Although it is like asking me what I think about Canadian politics, what is your take on the whole Austrian mess?

Some of our lyrics contain the left wing-idea that we sometimes like to make clear is our favorite political idea. We utterly reject the nationalist/right wing/sick brain philosophy.

Plans for the Future?

13 - For the time being we prepare the next studio session. The final and last Testify album, possibly. The best of the braindead 98/99/2000 material must be gathered and at least be released. It shall be a well done and exciting farewell opus.

None. Regrettably you have not asked for Duran Duran.

Bee Gees do not belong to our favorites, amazing though this must seem to you. We are more for Bob Seeger, and Charleston Heston.