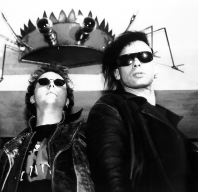 Bull (bass) and Sven Stone (drums) from Testify - and we're gonna try to find answers - the wrecked chieftains not being available:

What can you tell people about the band's sound who have never heard your music?

Bull: The sound of Testify is of a mixture of thick metal-guitars with noisy atmosphere-sounds and distorted sick vocals - all in all it's very hard stuff, so that most people shrink back in horror.

How long have the band been together & tell us a little about each band member?

Testify was founded in 1993 and underwent several metamorphoses in the early years when bandmembers came and left again: We heard there was some Thor and Lo, the old TFS-guitar-player, and Rascal, former leader - and Shoby, the former drummer - but since 1996, when we two joined the line-up, the personal has not changed: Myk (vox) is the ever bad mooded dark waver, Mathias (sound) is the ever cool-mooded engineer, Moses (guitars) tries to keep the band together with his never vanishing humour, Kullf plays his expensive guitars - and then the rest, the newest members - the two of us

What bands are you most often compared to?

Sven: The Testify band-sound is actually a copy of Ministry's sound, as we have to accept, because everyone makes this clear to us. Strangely we find many differences - but most people obviously don't.

What other bands influence your sound?

Sven: Myk is influenced by White Zombie, I think, and stuff like that - he only never wants to admit it. And Moses likes Fear Factory or g/Z/r or something. The sound I mostly enjoy on the other hand does not have any effect on our sound: and that is BjVrk
Bull: Kullf always talks of Korn and such stuff...

Do the band enjoy any radio airplay in Germany & other countries?

Sven: Recently we had a bundle of local Underground radio-shows that interviewed us and played some titles. But besides that - I think we are too inaccessable for most of the airplay-stations.

How do you think the music scene in your area could improve?

Bull: The music scene could improve by finally turning its back to phenomenons like Modern Talking and such braindead shit.

What's the best gig you've ever played & why?

Bull: I think the best Testify-gig I was lucky to share in was last year's gig in the Zwischenfall in Bochum/ Germany: Only because we never had such fun again - wonderful event.

In contrast, what's the worst gig?

Sven: For me the concert in Dresden some weeks back was the most frustrating, because of the masses of people that did NOT stream to the gig...
Bull: And Kullf was drunk...
Sven: Was he?
Bull: He played like Myk sang...

Germany is probably consistently the largest techno music market. Why do you think the German music scene finds techno more appealing than other forms of music?

Bull: We hate the techno music market. Please no techno-questions! It makes some of us sick, and I'm one of the some...
Sven: Which does not go for me, although I would never try to make such a sound.
Bull: Techno has been invented to make the listener hollow, hollow with endless repetitions and monotony - and glad of being hollow. Isn't that a strange conception?

Has the Internet helped out your own band & others?

Bull: The Internet gives us the opportunity to make many interviews - to get in touch with far more people than it would be otherwise. So it has helped I guess

Do you find it easier to stay in contact with Testify fans because of the Internet?

Sven: Have Moses and Myk perhaps contact with fans per Internet? I have nothing of that sort. But anyhow - I'm only the drummer

What other bands or artists would you like to perform with?

Sven: I would like to perform with BjVrk - but unlikely it must seem that Testify will have a performance with her. So I dream of my personal private performance with BjVrk.
Bull: I think we should not always talk such nonsense. Myk has told enough shit thru-out the years - which became clear to me reading some of the older interviews. It would be a helping event if Testify would play some gigs with bigger names from this Industrial scene. ... But when I mastered the latest Tote-Hosen-album I was soon about to ask them if they had in mind to take us with them on tour...
Sven: Now it's you talking nonsense. To expect them taking us as support!

A lot of artists like to record some portions of their music beforethey go into the studio, while others like to do it all in the studio. What's the Testify method?

Bull: In fact most of the titles are somehow finished before the real studio-session begins. Most of the guitars are already sampled, and Myk and Mathias and Moses have brooded over the arrangements for months - and then the finale step: the recording of the second-generation-guitars, of the voxes - and the mixing.

What could we expect at a Testify gig?

Do you find it difficult breaking into other music markets outside Germany?

Bull: After all we know this is indeed very difficult for Testify.

Back on the subject of gigs, do you enjoy smaller club gigs or would you rather play large outdoor events?

Bull: I prefer the smaller clubs
Sven: Please don't come with the old standards of intimate atmosphere... closer to the people-stuff! typical of bass-players. It's really far more exciting to be on big stages!


Lastly, do you know any Australian music? If so, what bands do you like the most?

Sven: I like Johnny Diesel, and I know INXS
Bull: When I was younger I really loved them!