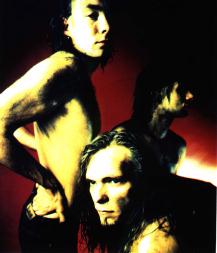 Myk: Hi! This is Myk from Testify trying to find answers.

IS: Why did you do a remake of "Ballroom Blitz", of all songs?

Myk: Why "Ballroom Blitz"? Moses, chief Testify guitar treater, came on with this idea. It was one of his 70's favorites, and it seemed a funny idea to give this stone - old classic a Testify gown. The Sweet were a very popular band in Europe 124 years back, they had a very interesting outer appearance, and "Ballroom Blitz" is one of their strongest titles, with weird almost psychedelic lyrics. We made two versions, one of them being alittle closer to the original. I think they both came out quite fine.

IS: Why is your new album called "Mmmyaoooo"?

Myk: It's quite an outstanding title isn't it? Everybody asks us about this weird word and its meaning. This alone is the best of all reasons to choose this title. It's an expression expressing sort of a mild enthusiasm, and we found it in a fantasy book by Terry Pruchard.

IS: MMMYAOOOO sounds faster and harder than your earlier work; why, and what direction will Testify take in the future?

Myk: We went through some development since the recording sessions of our early stuff. Especially the guitar and drum work needed some change into more metal - like direction, that's what we thought. We wanted everything to sound thicker and deeper and richer of atmosphere.

IS: Some songs on MMMYAOOOO like "Head of Compassion" and "Under Queen Whore's grim Protection" have explicit references to Christianity in them. Do you have a specific message regarding Christianity or religion in general?

Myk: I have a T - shirt which proclaims "Christianity is stupid", a very nice shirt; but I doubt Moses (a fellow Testify member) would share this opinion; at least that's none of our messages. (In spite of my fear that all religions are made by men and that gods rarely decide to walk the earth). The explicit references you talk about are merely references to virtues like compassion, humanity, etc., and their anti - emotions like malice and contempt and hate. Perhaps this does sound kinda religious, but I'm not regilious , more the Zorro- like black avengers-adorer who are filled with hatred against a world ruled by shit and animosity. This sounds quite melodramatic , eh? "Under Queen Whores Grim Protection" on the other hand is nothing but a funny tale in which all those "bad" immoral characters like the Lord of Humiliation, Tormentor Iron Grief and last but not least the famous Queen Whore all of a sudden discover their wish to become pure, more Jesus - like. These are not very serious lyrics, I fear.

IS: In "Dumb" what do "Shlimperdibyx" and "Das Ging wie der Blitz" mean"?

Myk: "Shlimperdibyx" is a German expression of astonishment, but it's not very usual. Quite a forgotten word. "Das Ging wie der Blitz" is a German sentence, which you have probably expected, and it means, literally "That went fast as lightning". The whole sentence you might interpret as : "You've grown dumb, without pity and wits and all that -alas!- in an amazingly short time". (Which is a development that many people underwent, I sometime get that impression)

IS: What are your favorite sample sources?

Myk: We go thru video,films,CD's;we even sometimes walk about with a portable DAT,always preferring the cliche-like typical industrial noises,which proves our not being very innovative.

IS: What music do you like/what are your musical influences?

Myk: Many industrial acts I do like, but I'm not that mentally wrecked to give away the names of those we rob ideas from,eh?!!!

IS: Is there a particular reason you used a picture the inner ear on the album art for MMMYAOOOO?

Myk: The inner ear: that's the part of the human body which ought to be ruined by the insinuating noise that the Testifyiers are arrogant enough to call "music". Was that a good PR slogan? It's a very good statement I think. And it will probably persuade thousands of the mentally wrecked (which I am as well of course) to go and buy the famous MMMYAOOOO album, or?? So I don't have to mention the flat reality: Barbara Thoben our beautiful cover designer, presented this motif, and although I liked this picture and its quite obvious connection to harsh industrial sounds, my main intention to agree to that motif was to agree to anything Barbara suggests to me, hoping for the final suggestion in the end, that has something to do with regions of the body that are not the inner ear.(Ey! I made this up all on my own and quite spontaneous, and I think I'm in good form, because now I think that the second version was the better PR slogan; what do you think?)