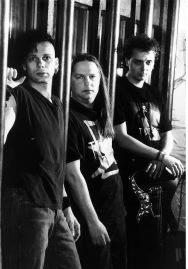 On the edge pof the thrash/industial scene is Germany's Testify. original ly an offshoot of the Fair Sex (who you might know from their huge club h it Not Now, Not Here), Testify has quickly become it's own entity and she d the side-project status. Founding member Myk Jung admits that "those wh o hated (The Fair Sex) will be great admirers of (Testify)." And check th is out, not only are the killer cyber/thrashers, but they;re currently wo rking on a cyber opera. Their first disk, Testify 01, yielded the hit A.N. G.E.R., and their EP, Ballroom Killers/the Blitzkrieg Mixes featured a manic version of the Sweet's Ballroom Blitz. Testify's most recent MMMYA OOOO (the title comes from a Terry Pruchard book) was among the hardest r eleases in the genre in 1996, yet Testify remains musically accessible. I n 1997 we'll see remixes of many of the songs ffrom MMMYAOOOO. -- mel

Cyberia: What does MMMYAOOOO refer to?

Cyb: Do you consider Testify to be politcal? In what way?

Myk: Since I (main-lyric-slave) have always been an adorer of left-wing r evolutionaries, it's obvious that we do not relay any themes of violence, born out of pure fun, to those who listen. Our violence is directed agai nst violation, if you please; and there is too much of all fucking sorts of violations being cultivated on the sick Blue Planet. Big themes, wha? Sounds somehow political. So we must have sort of political aspects, I fe ar.

Cyb: Whay do you listen to?

Cyb: How long does it take testify to pput together an album?

Myk: The first record had a "writing-phase" of less than 6 months; for th e second we spent more than a year in gathering material. And: the first steps of creativity are the easiest, for us, I think. It's not that hard to put together some ideas that sound somehow good. It's harder to devel op those first ideas properly, so that in the very end they are really go od.

Cyb: Do you find yourself aligned with any particular musical movement?

Myk: I dont care about some sort of strategic PR-steps that refuse to nam e the whole phenomenon "Industrial": which is a term you should avoid in Germany! It's already out , as many believe. In fact I fear that Testify will find on the North American continent more acts being somehow akin!

Cyb: I think your attitude is pretty much summed up by the line from B Bl aster: humans are used to getting pinned, nailed, wounded and hurt. Do yo u see any hope for humanity?

Myk: I think (which never occured to me before) that the line you quoted reflects the Testify-attitude very well. Yes, it might be a dim view, and indeed: sometimes I have not too much hope for humanity. Let's all hope this dark pointofview is only due to my being a maniac depression-ist! On the other hand: there is too much of senseless "bright view"shit in the Pop scene reflecting a world that simply is not the planet we live on! To justify some artistic work which is sortof dim, it ought be enough to de clare that you see yourself as some sort of counterattack on the great wi tless flatness! He? Even if you laugh the whole time of your personal lif e!! (which is what I do, but I fear it's the bitter sarkastic giggling la ughter that is mentioned in "Quest Of Nothing": the laughter made of lost hope, or so.)

Cyb: Is humor an important aspect of your music?

Myk: Humor? That is a PR-gag! I, headmaster, har, don't accept any sort o f humor within the band's concept! O. K., the "Pink Goblins" bring some k ind of not-too-serious-aspect into the Testify-lyric-world, as well as Th e Queen Whore... and the Tormentor Iron Grief, who is asking for medical care to heal his growing humanity... O.K..., and the mystical Roaster Toa ster in B. Blaster ....Yeah, the humor-aspect, very important! But only t o deceive those critics who are always looking for that aspect, and if th ey are not successful on their search, they might say something like: "Oo oh! Testify are narrow-minded dim-view'ers!" (which they are, in fact). V ery clever, eh?

Cyb: What are you currently reading?

Myk: I started "The Naked and the Dead" of Norman Mailer, but switched o ver to "Tortilla Flat" of John Steinbeck, probably only because I missed the humor-aspect in my personal 96-life, I fear.