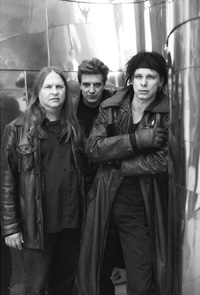 The trio of Testify create head banging metal - industrial. Gnawing vocals, samples, and chopping guitar create a raw fury of sound. You'll appreciate their latest release, MMMYAOOOO, if your in the mood for a guitar heavy extravaganza. Guitarist Moses W. gives his testament about the band.

How did Testify come into existence? First of all it was a side project of two members of The Fair Sex who wanted to do something different. During the first year of Testify , I joined them and became a full member . Now it's no longer a side project, but it's a real band thing. We worked for more than a year on the new album. Myk Jung and I most of the time and for the last two months with Mathias Black in the studio.

How would you describe Testify?

For me, it is my chance to combine musical influences. I really am a headbanger.I love metal music, and I feel that many industrial bands are lacking a bit of real metal approach. I also get that impression from talking to metal fans, who don't like industrial stuff, because it's not intense enough. The thing that we try to do with the new album is to bring more real metal aspects, more craftmanship on the instruments,more interesting guitar playing , and more typical drum sounds too industrial.

Who are some of your influences?

I loved Judas Priest when they were active. I love modern stuff. I like the last Pantera album, and Fear Factory. On the other hand, I'm also interested in electronic stuff. For example, Ultravox or Kraftwerk.

Do you think music in the future will be more technology driven , or driven by the raw power of metal?

I think the perfect thing would be a mixture with the best things of both musical styles. The typical metal aspects: raw and wild and harsh, should have a chance to come through. We tried this time to get a step further, and I think we made a big step. But I think there is still something more to come in the future. I don't feel it really needs to be divided this way. The metal audience is still very much into the thinking that there must be a live band, the drummer has to count 1,2,3,4 and with no playbacks. Nowadays it's foolish, because you can see Ozzy Osborne - brilliant guy, brilliant music; and he is working with samples, with newer sounds, and with playbacks live on stage, and it works.

What's the response to your music in America compared with the response you've gotten in Germany and the rest of Europe?

I really have the impression that there is much more response in America than Germany. Not only for Testify, but the whole scenery of industrial music. I think that "Industrial" doesn't fit anymore, because there are too many different aspects that are gathered under this name. I see that the American listeners are more open for music development than the German audience.

How has your latest album progressed from your previous work?

We have alittle more song structure. There are of course songs without structure, but there are songs with a real development. Adam Grossman of Skrew came over for one month and worked with us during the time of production. It was very interesting input. He did a guitar solo,some choir vocals, and he added some drum programming.

The music of Testify doesn't reflect what one would expect from a German industrial band. Did you make a conscious effort to move away from German influences?

No,not really. We never had the intention to draw a strong line between Testify and other German acts. Infact, there is not a strong contact, or call it a scene, where you meet each other or see what other bands are doing. I'm personally not interested in what's happening in Germany. I'm only interested in the music itself. There are some acts in Germany which I like. I don't like them because they are from Germany , but I like them because of the music they are doing. For example, there's the band Armageddon Dildos or Die Krupps with who we made the first tour here in Germany and Europe.