Mother, Nature and the Machine are everlasting

The SIELWOLF is not only a piece of equipment used to clean and decalcify the sewer system. No, this equipment doesn't just dig in the sewers, but also deep in the secrecy of one's own subconsciouness where it stubbornly drives that which we have thought to have left behind us: fears, fantasies, the absurd and repressed. 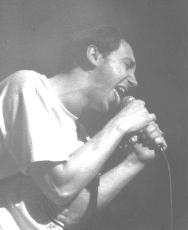 "I believe that we are trying to do just that with our music" says Peter Prochir, next to Petra Tausendpfund the founder and head of the group SIELWOLF. "To filter or not to filter out all of the trash and all the dirt which is within us and particularly within me", psychological hygiene at its best.

The band was founded in 1983, when Peter Prochir, formerly the percussionist of the Free Jazz-Avantgarde-Formation KASSIBER and various other punk bands, began to experiment with taperecording loops. Today he states, "that was quieter comparable to Ambient or Industrial music of today." In 1984/85, the project COLLECTIONISM was introduced by SIELWOLF which strowed the roots of the band's music as it is today, a mixture of Hardcore-Ambient, innovative Industrial with a shot of sickness. The project DER RISS followed and the maxi "Paralized Voice" was publicized. "We took a loop from the 70's band BIRTH CONTROL. In 1986/87, the first attempts at Acid-House were made. I read about this concept and wanted to try to do something similar, but something totally different resulted from it, but very funny nonetheless."

The first SIELWOLF album ("Sielwolf", 1990) was made up of samples which are based on the attempt to connect elements of the modern E-music with the structures of Pop/Rock. This idea corresponds to the meaning of Industrial the way it is seen by my interviewee: "that one mixes all the components and makes therefore something else, something new out of it." Somewhere along the line the lyrics were added which mainly come from the time in which Peter Prochir was haunted by pretty bad dreams: "I would wake up in the middle of the night with specific pictures or phrases in my head which I wrote down in a book. I put them together similar to the samples without changing the wording. That is how the language results, which is meant to be more associative. Many things are grammatically incorrect. It's just like I would sample an emotional condition." The lyrics reflect this exact condition and are not logically constructed. Peter does insist, however, that he doesn't only think that way, that would be sad..."then I may as will kill myself!" It is no different as with other people, the dissatisfaction which one senses from the lyrics. It is more the positive expression of the seemingly destructive adventure.

On the other hand, the music develops totally different and was, for example, on the first album purely a head birth (?***). There are songs which consists of up to 60 samples taped together resulting in the terribly wonderful and typical SIELWOLF-sound. "At first there was a theme, a title and then I took things meticulously from thousands of albums, simply based on the name. On the first album I took a particular sample based on a percussionist who was supposed to already be dead... I have a picture in my head and try to translate it into samples that would also fit the text. Or, in reverse, I have the text and I look for samples which accentuate it." Always in search of that particular sample? "Overtime this become more organic, specific things did not have to be searched for anymore. Meanwhile we have found our own style" which has simplified our current work. "As soon as some typical things are contained in the music, it gets easier. I have a lot of things to choose from, but still add some new ones which I know or have heard somewhere before." This must have been infernal work in the past because all ideas and recordings (including the last album "Metastasen") were done with a low-budget sampler and an ordinary tape recorder. Only in the studio (where the band had two weeks to record) would the finishing touches be added which explains the raw sound. 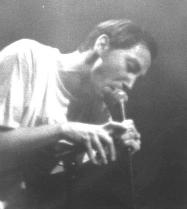 For Peter personally the basic theme of the "dirt digging" revolves around bringing the inside to the outside and the search for new sounds. Different components are supposed to be brought together and he can't imagine to remain in the same style for ten years. "I want to get closer to a central theme which I don't know myself what it is. I try to get at a basic substance to find a reason why some things are so bad and why we think it is that way." An example are the songs in "Metatasten" where he tries to emphasize this: "it revolves around that one pictures one's own body and tries to find where the negative is. I try to say it more clearly even though the danger is that is becomes microcosm which is not understood by the outsider. It could also become something good so that the specific 0"sickness" disappears sometime. Would "SIELWOLF" then still be this machine, this fast rotating bullet with sharp teeth...???