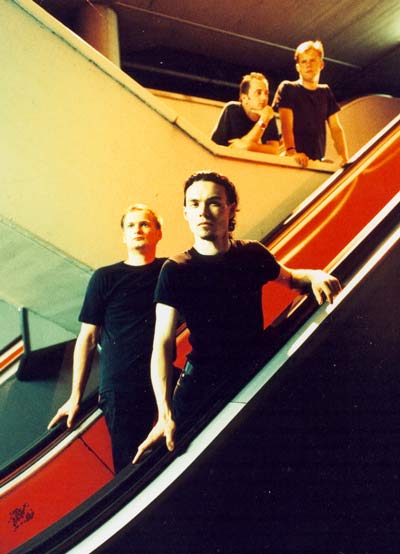 We have been in contact with Stephan from PNE (our Schizophrenic Pal. ) Here he takes us thru some of the informations on this excellent electro act out of Hamburg Germany.

How about the evolution of PNE formation?

In Nov. / Dec. 1989 we started our first experimenting on music together and we called this project "Plastic Noise Experience"; Claus made some tracks before that point of time under a project that was called "Plastic Error", which do not exist anymore.
We bought a sampler and a synth (Ensoniq) and started PNE just for fun. After several weeks, some friends wanted to have some tracks on tape, so we record our first tape. After further three tapes we were asked for some tracks on samplers and recorded our first CD: Transmissiona for ClA-Rec., a compilation of some tape-tracks. After the Gold -MCD and the "Smalltown Boy"-CD-Ep we were licensed to KK-Rec. in Belgium as the first German band. There we published String of Ice -CD and Visage de Plastique CD Ep These CDs were the basis for the CD: "-196 =BA" here in the states. Then we released our back catalog in form of the Transmitted Memorya-DCD and the Neural Transmissiona-CD in the states. A new CD and MCD on KK-Rec. will come out in the next months. Since 1990 made a lot of concerts in Europe and nowadays we have a small studio in Hamburg.

Members of the band & their positions ?

PNE are: Claus Kruse( programming and voice ) Your schizophrenic Pal ( programming and Iyrics ) To say it in short words, both are doing everything. We program our tracks on our own, then we come together and record the material. Nowadays we live in a distance of about 600 kilometers. So we meet for several days for recordings. Normally the lyrics are my work but this depends on a case by case basis. In most cases You hear the voice from Claus, but sometimes..

We haven't heard from PNE in a while. What's with the band ?

Yes, it become a bit quiet around PNE in the last two years, but there are several reasons why. First of all, we haven't got as much time for doing music as in the past, because we had to do some exams and so on. A second reason is that Claus concentrates for a while on his solo project Gaytron and recorded the Phase I CD and the Toy-CD-EP. A third reason is, that our former management made some trouble with KKRec., but believe that this all belongs to the past. This were three of the reasons, but I think all problems are solved. The new PNE-CD and MCD are ready and we will concentrate on the next, we will see.

What makes an influence to the music of PNE?

In general our musical influences are: Kraftwerk, Cabaret Voltaire, FLA and belgian bands like the early Klinik tracks, Dive and Vomito Negro. Especially I am influenced by the music John Peel played in his radioshows in the eighties, and bands like Bauhaus, Wipers,Husker Du , Dinosaur Jr. and early Sonic Youth. Another influence may be Science-Fiction in lyrics and films, especially the stories from the author Stanislaw Lema ( Solaris, Stardiarysa ).

PNE is together for years, how do you look at the quality of electro movement?

I think listening to the CDs in the shop before buying it and informations on the music by press and DJs becomes very important. In the time we made our first CDs there were just a few labels that release this music and they made a kind of quality-check. Minor quality was bound to a huge tape-scene. Until now a CD production was getting cheaper and cheaper and new labels formed, which don't check the material anymore. That's the development in Europe in the last years. All bands of the former tape-scene, or the new ones that were bound to it, have to release CDS and of course get to the states. This could be a good expansion of the music-variety, but I made the experience that it destroys the whole scene.

We love your cover of Bronski Beat. Why'd you choose that one?

There are a lot of reasons why. First of all, because it was in the past a kind of homosexual hymn. Claus is, and made the first version in the time of Plastic Error. Second, because we like the music from Bronski Beat very much and third, because of the gag that a small electro-project like ours covers a number one hit of the eighties. It was a joke, just for fun and we never thought to release this track on CD., It was always the last track on concerts that we played. But it went to a real classic-track.

Any more cover songs in the future & What's PNE's next steps ?

I don't know. We made only a few "covers" in our history. First the mentioned track "smalltown boy"; second the track "why" from the "- 196C" CD, I guess only a few will recognize Bronski Beat again, but this version is out of the state of mind: You said we are doing pop-covers, wait we can do things in another way, now listen to this !!! And the third is "moving hands" an old classic from the belgian band called The Klinik. This was our second live joke, because the band doesn't exist in that time and we sampled a part, looped it an put in a new break. But after Dirk Evens, (the voice of The Klinik & now Dive ) sang this track several times live on stage with us, we don t see a reason to do that again. Can you desire more ?In my opinion a lot of bands are trying cover versions, because they have no ideas for own tracks. We have and so we have done only a few covers, but perhaps we will do another, who knows ? Special thanks to van Richter Rec. And electro-greetings to