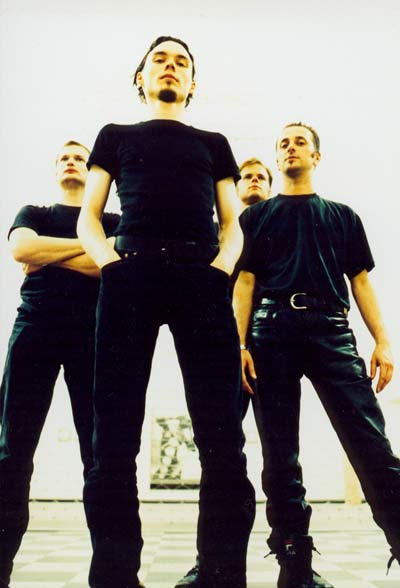 TI: How did PNE begin?

Stephan: One day, in 1989, we got to know each other in a small discothek in Minden which is our home town.We talked about music and whatever and realized we were on the same wavelength. Claus told me, that he made some electronic tracks under his project "Plastic Error". I listened to that stuff and we planned to get together to start experimenting on a musical project. In late 1989, we bought and sampler and synth and started PNE just for fun. After several weeks some friends of ours wanted to have some tracks on tape. After three tapes further we were asked for some tracks on samplers and recorded our first CD: Transmission for GA Records, a Small Town Boy MCD we were licensed to KK Records in Belgium as the first German band. There we published the String of Ice CD and Visage De Plastique MCD. These CDS were the basis for the CD -196 C here in the states. The we released our backcatalog in the form of the Transmitted Memory DCD and the Neural Transmission CD in the states. Since 1990 we had alot of concerts in Europe.

TI: What kind of method do you use to get an analog sound, as opposed to digital? Your opinion of both?

Stephan: We like this analog sound very much and we have more analog synths than digital ones. Also we use samplers to make real old synths playable with MIDI, but there is no method. In my opinion this flavour of analog depends on the music which influences you in the youth,and in our case it was Kraftwerk. Another point maybe the production of digital synths in the last years,perhaps new days are rising? Except afew firms from the states and Germany, all firms produce digital instruments which try to sound very natural(like pianos,strings,flutes and things like that). These instruments have 16MB-sample-ROM minimum which sound horribleand no new synthesize form ,unbelieveable. So we use the old ones and a few new but good ones to create the music we like, then we record the material in our little studio in Hamburg as we like and that's it.

TI: Are you based out of Germany?

TI: What was your work like before -196C and how has it developed since then?

Stephen:(Gives a discography) The -196C was our last production. For the future we are programming on a new PNE CD for KK Records, but we don't know when it will be published in Europe.

TI: What have each of the members of the band been doing?

Stephen: To say it in short words, both are doing everything. We program our tracks on our own,then we come together and record the material. Nowadays we live a distance of about 600 kilometers. So we meet for several days for recordings. Normally the lyrics are my work, but this depends on a case by case basis. Normally the voice is from Claus but sometimes...

TI: Do you still have plans to continue PNE or work on otherprojects?

Stephen: New CD is in work. Claus made a solo project called Gaytron (Gay from homosexual), only published by GA Records in Europe. Also we are programming in other projects but there is nothing released until now. Electro- greetings to everyone. Special thanks to Van Richter Records.