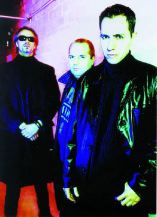 For someone who hasn't heard Girls Under Glass' sound, how would you describe your own music?

This question is not easy to answer. We developed and changed style alot. When I tell you now that I would describe GUG as a modern electro-wave band with 80's gothic influence everybody who knows "Firewalker" will laugh about that. "Firewalker" is much more industrial-pop and very much influenced by the american alternative-music scene. All other records are much more wave-orientated and live more from atmosphere and melodies.

What sort of bands do you like & do they influence the sound of GUG?

I always was so much open minded. Even when I was a youngster I went to a Level 42 concert and went to a gothic-convention afterwards. That was in the early 80's. I grew up with T-Rex, Sparks, later with Depeche Mode, Cure, Sisters etc. In between time I went to record-stores and bought Dark Angel, Death and Dead Can Dance. Nowadays I love Madonna, Massive Attack, Filter, Tea Party, Type O Negative and maiynly all the US-Industial stuff (NIN etc.). So obviously we are not influenced by any other bands at all. I just like intensive music. I hate country until I heard Simon Bonney (from Crime And The City Solution). His way of interpret Country was so intensive that I totally loved it. There is nothing I strictly refuse. It must touch me, I must feel something while I listen to the stuff. That's all I need to like certain music. When we do music we live it, we give passion into it and we try to transport emotions. Like I get this from other music I want to give this to other people with my own music. Take and give. Simple game.

How has the Internet assisted the band (if at all) & what sort of things have you discovered there?

Internet doesn't mean anything to us. We started in 86, when nobody was able to pronounce Internet correctly. Of course now we are present worldwide just by giving interviews to a internet magazine, which is a great opportunity. The problem is, that only people who are already intersted in GUG will watch this and we hardly have a opportunity to get new fans by Internet. That's at least what I think. Being present and selling records are two different things. In US Internet has a much bigger lobby and is much more important than in Germany. In US of course we are still on the way to being built up by Van Richter. So this is mainly the first time that Internet and Internet-marketing becomes a important and present tool for us.

Do you think the MP3 format poses a threat to getting some payment for a band's music?

I am still a bit scared about MP3. Sales will drastically go back while internet-performances will become more and more important. If this gives a band/musician still the opportunity to getting paid for his art in an equal way I only see advantage of MP3. If this just destroys the whole scene of potential CD customers it will destroy automatically the band. And this is not funny! We will see what happens. A big advantage could be that (for example) GUG can give internet gigs in the future. We rent a club, install 2-3 cameras, play a live show and kick as and millions of internet users can watch this on their computers and drink some beer with a couple of friends. This is really cool, isn't it? But is this the future??? Do you really think that Internet can replace the real experience of a intensive live-concert? I think every development has 2 faces. I hope this is not the future. But I still think it would be funny to go for that. At least it's much better than not being present in other countries at all (for example for money reasons).

What's the best live gig you've had & why?

We had more than 400 concerts. It's so hard to say which was the best one. We had a super-cool performance at the Zillo Open Air last weekend (14.08.) in front of 5000 people in a totally packed airline-hangar. That was amazing. I doubt that this was the best concert, but I was 100% satisfied. And there are hardly concerts that I would give this predicate.

Are any of your fans very fanatical & does it worry you with how fanatical they seem?

No, we don't have this kind of fanatical fans. When I was on holiday a couple of weeks ago suddenly a GUG fan came to me. In the beginning I was a bit scared because his mother told me that he wanted to cancel his holiday because the new GUG record came out during his stay in Spain plus he went for GUG 86 as his car mark, so I knew he is definately a real fan, but he was very nice, very clever, charming and we just became good friends since then. We have very critical fans, who also tell us when they dislike a certain musical development (such as "Firewalker" which was too hard for most of our fans). Because GUG were never a real scene-band and we were never standing for a certain image, there is not such a strong relation between band and fans than in other bands. The more extreme the band, the more extreme the fans can be.

What disappoints you most about the music industry?

I work for the music industry. I am doing label management for an english company. I am the german representive and do promotion and marketing for acts like AniDiFranco, Billy Bragg, XTC, The Church etc. I like it a lot. I don't have any problems with the record company scene at all. They want to make money, that's all. I can therefore accept that they have to turn down bands, that they have to kick bands off their label. There are always bands that are satisfied and unsatisfied with their record company. I work for an indie and try my best to give all "my" bands maximum support. That's all I can do and that's what I expect as a musician from the label I am on.

Do you prefer to work in the studio or out on stage?

I prefer the studio work. It gives me more space to be creative. Concerts are for fans. Of course it is also a great experience, but we do this more for our fans and not for us. We really enjoy more to get new ideas together, to write songs and produce them.

Will commercial radio wake up to the fact that there's life outside the mainstream?

No they won't!!! Every try in Germany is a big failure so far. All the more progressive and alternative-orientated radio stations had to change their programming drastically, so that now you hardly can separate between a mainstream station and a so called "indie" radio-station. There are no big differences. Radio is not the big thing where people get their information from. Radio in Germany is practically dead. I know, it is very different in USA, because they have many college radio stations that are attractive to many young listeners. That's great. I would like to have this situation in Germany as well. Then obviously your question can be discussed again. I don't know how the radio-situation is in Australia.

Why the name Girls Under Glass & what does it mean?

It's a name and it means...."Nothing". It has a flow and doesn't give you automatically a direction of what is behind the band. For example Fields Of The Nephilim, Dark Days Of Doom, Creatures Of The Night, Blah of The Blah and all these other cliche-names are telling you straight away what's going on music-wise. I think this is boring. Girls Under Glass stands for open-minded people that are doing open minded music. Why should I choose a name that implicates a certain kind of music???

What's the best part of being in a band?

Being creative with other persons and doing things that are not transitory. In the early years it was a bit different. I liked to be surrounded by good looking goth-chicks and so on.... (you know what I mean).

With a new album just about to be released, what are your plans for the near future tour-wise?

Which new record you mean? The german release of "Equilibrium" or our second US release "Nightmares" by Van Richter? In Germany we only do a couple of Festival-gigs this year. We decided not to go on tour. We are tired of touring. For "Nightmares" it's a different situation. This record is first of all to introduce this band to the US scene and to revise the impression of the band you got by listening to "Firewalker. Our strength and possibilities, our most creative outputs you will find on "Nightmares". Thats the ultimate CD to understand the band and getting a idea of what GUG is about. It includes material from all our records apart "Firewalker". This is the album to built up a standing for GUG in the USA and other countries (as Australia etc.) we haven't been released before. We have to wait what happens and will react when it's time to react.

When you know all our records you know that it's very hard even to compare any old record with another one. We changed a lot, with were always interested in experimenting with new styles and sounds. Therefore we lost a bit our original way and released two records that have hardly anything to do with the original GUG sound. "Crystals & Stones" and "Firewalker" are very different from the rest. Apart from that I can say that we started as a very serious gothic-electro act. the first two records "Humus" and "Flowers" were very dark. After that our former singer Tom L|cke left the band so that we had a new start with the "Positive" album and me as the new singer (I am also founder of the band but started as a guitar player for GUG). Positive and Darius were more poppy comparing to the first two records while the follow-up "Christus" which is our strongest record so far was getting harder again. Our very new record "Equilibrium" is more in the tradition of Christus and Darius. So after leaving our way to the more experimental and electronic side we went back to our...roots, in the sense of the sound that stands for GUG.