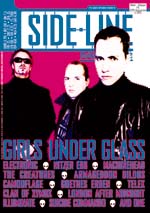 Axel Hermes (programming and live guitar), Hauke Harms (programming, synths & production) and Volker "Zaphor" Zacharias (vocals & guitars) embody the basic line-up of GIRLS UNDER GLASS since 1990, while several guest musicians came and went release after release. This time, after the exploding and controversial "Firewalker" cd the German trio return with a much more paused and moody release haunted by that unique and specific Girls Under Glass atmosphere. Darker and and gloomy, the new album "Equilibrium" is probably their most mature and balanced release ever. We evoked some 12 years of career on the scene with the Girls...and also their best ever record "Nightmares" will be coming soon on Van Richter Records USA!