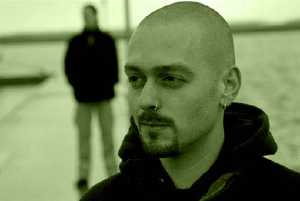 Underwater Pilots are Manuel G. Richter and Gregoire Vanoli. They are a german band creating electronic pop music with subtile darkness, melodic hooklines and dancable beats. Mostly they work in the area of dark-electro and the future-pop-scene. In 2002 the guys met for the first time while working on a remix and noticed that they had a similar way of feeling music. But Manu and Greg also noticed their completely different ways of producing. While working together,they saw how they could complement each other and decided to start a project. Why they chose Underwater Pilots as the band name? Because Manu and Greg love spherical and liquid sounds, kind of an underwater feeling. And the guys both love to sit in their cockpits, pressing buttons and turning wheels.In summer 2002 they created a first demo. They worked on some older tracks from Manu, giving them a more modern touch. This was the beginning of Underwater Pilots.

Greg's history
Born in april 1977. He grew up in Bblingen, Freiburg, Lrrach, Tunis and Hameln. Then he moved back to Freiburg, then Hameln again, and finally he lives in Hamburg. He began to learn the piano in Tunis, and years later he begon to teach himself guitar and bass in Hameln. During this time, he played in rock-, funk-, fusion- and Big- Bands. His interest in electronic music came up in '97, and soon after he got his first own computer. He then worked on many different projects, mostly unreleased until today. Today, he works as a supervisor in video - postpoduction and 3D animation, and supports many people in digital video productions.

Manu's history
Manuel was born in january 1974 in Mlheim/Ruhr (Germany) as the son of two musicians and grew up near the small town Hameln. At the age of ten he began to study the drumset for eight years. Later he started to explore electronic music. He played in different projects and bands from classical drum ensembles over pop to rock bands. In the early 90's he started to combine the drumming with electronic sounds and compositions. From 1990 to 1998 he recorded some tapes, a CD and played a lot of gigs with his band One Step Divine. At the same time he worked on some electronic projects between pop, electro-ebm and experimental. Since 1997 Manuel has been working on experimental composing and sound art, released some vinyl and CD albums on Hands and a lot of compilation tracks. He's played many live gigs in Germany and other european countries. Manuel works as an educator and freelance music therapist in Leipzig. Since summer '05 he's also been teaching sound synthesis at the sae-college.

Back to UNDERWATER PILOTS page.