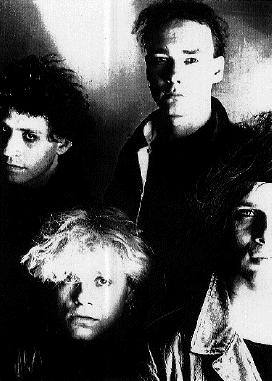 THE FAIR SEX is Myk Jung: Vocals, Rascal Nikov : Master Bass, Programming, Blonder : Guitar, Moses W. Guitar.The lineup has been consistent since the band formed a decade ago in Essen Germany, except for the tragic death of their drummer live on stage in 1988. He was never replaced, only by machines. TFS was one of the first bands ever to crossover electronics with guitars back in the mid 1980's. It amuses the band that the current electro industrial genre is stressing the use of mixing electronics and guitars as if a contradiction. As a pioneer of this trend TFS's past decade of work demonstrates how inspiring it has been to work on both sides of the spectrum.

THE FAIR SEX has released three full length records on their first label Roof Music, thereafter signed to Rough Trade where they released five more titles. The band's first North American national release Machine Bites, was a classic anthology of their previous five titles. The single "Not Now, Not Here" was a smash club hit. Alternative Press called the record "a must". Touted as the kings of electro body music and successor to Skinny Puppy , their first U.S. release created a good underground fan base and impact with the media.

Three years in the making Labyrinth is the first rock "cyberopera". This historic release comes with a seven page press kit to guide one through the cyberaction adventure. THE FAIR SEX show their greatest range yet incorporating various genres such as classical and opera. The sixteen song album defines the future of industrial music. Featured singles include "Cyberbite" and "You Know How", both European dance club hits.

Their latest collection of unreleased live and studio material, Fine. We Are Alive, features the smash dance floor single "Outraged And Moved" and the SKINNY PUPPY (live version) of "The House Of Unkinds". TFS has topped the charts with their past releases Labyrinth and Machine Bites, now Fine. We Are Alive will take its place in Electro Industrial history. This album is a must for fans of the the past Skinny Puppy era. The Electro - Industrial changing of the guard is now in The Fair Sex hands. With the success of national club charted singles "Now Now. Not Here", "You Know How", Fine. We Are Alive promises to be a breakout for the band - now entering its next decade!

THE FAIR SEX combines the best of hard electronic dance music with well placed guitar staccatos. Over the years TFS has drawn a strong following throughout Europe and are considered a predominate influence to the Electronic Body Music club scene. TESTIFY is the evil brother of THE FAIR SEX and has had great crossover success with the fans of the Metal - Industrial genre. The music video A.N.G.E.R. was featured on MTV!

After a lengthy absence The Fair Sex return with their first ever double CD retrospective set entitled "The Dark Ages" which includes a best of compilation from the last chance years and two brand new unreleased tracks, "Children of the Revolution" (T Rex) and "Beautiful Nightmare: The Number One".

TFS goes into the studio vault with "Drop Your Anxiety" and brings out new remixes from the past including songs reworked from "Bite Release Bite", "Spell of Joy" and "Labyrinth". These seminal club tracks are destined to be dance floor staples for years to come. Both new The Fair Sex releases take their place as timeless classic albums in the genre.

Back to THE FAIR SEX page.