SIELWOLF is Europe's premiere METAL NOISE band discovered by the same talent agent as Einsturzende Neubauten. The band was formed in 1989 by Petra Tausendpfund and Peter Prochir in Frankfurt, Germany. Peter previously was a drummer in a wide range of punk bands and was a member of a free-jazz/ avant-garde formation. Currently Petra and Peter create samples/performance projects together. The current band line up is Petra Tausendpfund - Programming/ Samples, Peter Prochir - Vocals/Samples, J. Van Der Glaas - Drums, A. Kugel - Bass, Th. Low - Guitar. SIELWOLF are members of MACOS. 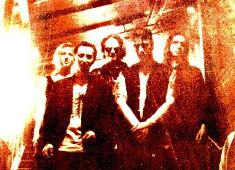 SIELWOLF can best be described as loud, fast and hard, but not your stereotypical metal genre band. Under the surface a raw and kicking noise/industrial sound they mix up different musical styles, combining them with samples and cites of their manic and extensive video passion.

The full length release Metastasen combines with the maxi single "Beweglich Animalisch" which contains three different underground hit versions of the title track, one based on Nirvana guitar feedbacks and a second version remixed byLassigue Bendthaus for the club profile. This thirteen track album which spans over seventy minutes in length is not only a great value, but will appeal to crossover metal/hard music fans.

SIELWOLF brings out their new album Nachtstrom which follows on the success of the 1995 hit album Metastasen and 1997 mini album Magnum Force . The band's sound has been compared by the press to early Godflesh and Einsturzende Neubauten. Nachtstrom was produced by Yello's Carlos Pern . The first single from the record is the EBM track "Korrosion". SIELWOLF delivers a brutal blend of aggressive industrial noise with sequenced dance beats and dark haunting lyrics, combined with samples and cites of their manic and extensive video passion. These cult German Industrialists have been well received by the Metal, Industrial, Ambient and Noise underground. Nachtstrom can only build on the band's growing buzz with the media and hardcore fans of the genre.