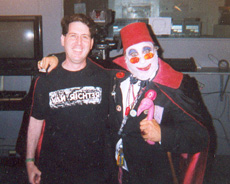 Even if we usually deal with Black, Doom or Death bands and records, we must remember that good music doesn't stop there. I am even sure that YOU like at least one industrial band ... So here is an interview with a label that deals with this genre : Van Richter Records.

Why do you think the industrial movement is important in music ?

Industrial though never given the importance or respect it deserves is a very important genre because of its incorporation of so many other genres of music into it as well as spoken word and the advanced technology it uses to bring the music across. Also industrial is one of the few genres left that conveys a message of angst and rebellion for the youth!

What is the statement Van Richter Records wants to make in the world of music?

We want to show the world of music that you can put out high quality bands on a small roster not 1000 of mediocre bands as most labels do. We want the world of music to see that we are the premiere artist development label for the leading bands in the industrial genre!

How is it like to manage a label of this kind in the States?

It is very difficult and long thankless hours. Not only do we give personal attention and priority to every new release (that is why we keep our roster small) but we interface with every facet of the business including Retail, the Media, and the bands themselves.

Among the bands you have on contract are Testify, The Fair Sex, DHI, Plastic Noise Experience and Sielwolf. What determined you to sign up with these bands? How did you get to know them?

Initially when we started the Label we were looking to license bands from other countries. I was in touch with numerous labels as I had worked with them before when I was at Wax Trax Records. We now have proven to these bands that we can do a better job than their first label and have signed our bigger acts like Testify directly. Now we concentrate on signing and developing our own roster instead of pure licensing like too many U.S. labels. The initial reason we signed these bands is because we felt they were their respective subgenre leaders.

Bands usually want to know what a certain label is willing to offer them and others won't. What can you provide for a young band, determined to make its name known?

A lot of our personal attention including a lot of artist development money for marketing particularly at retail (where it counts most). We work very closely with all our bands and have developed strong relationships. We can only do so much as the band has to help itself as well by doing self-promotion, which most importantly means touring!

I've been going through some of your older interviews and I understand people consider your label to be too "pushy" in order to promote its productions. Why do you think this impression has formed, what is so aggresive in your marketing plans?

We do not believe we are too pushy. How can one be too pushy in this business?! If we were not pushy then we would not be doing our job to promote our bands! A lot of this might have formed because of internal jealousy from other labels as we do have some of the best bands in the genre! Our marketing is very aggressive which our bands appreciate. We do not give up on them or their records even years after their released! We utilize all the traditional marketing with the media and at retail. Our retail focus is one of the best on the indie level!

More and more people in Romania start to listen to industrial music, though there are no important industrial bands around here... Can you think of a reason the industrial genre is gaining so much nowadays?

Funny that it is growing in Europe because it is dying in the States. Europe is a much more open place for niche genres unlike the States which has a very big pop music focus. So I believe the underground environment is much more supportive for this type of music in Europe which is good for your country and bad for the States. As you can also see so many industrial bands are coming from Europe in the last decade and the U.S. bands are growing less and less in Industrial music.

Have you considered promoting your bands in Romania & Eastern Europe... band tours and stuff? What are your plans for the near future regarding promotion for your bands ?

Yes we would like to promote our bands worldwide, however we would need to have distribution in those countries to make this feasible. As if the bands toured Eastern Europe it would be important that the records be available to purchase by the customers. This is how the band and label makes a living. Right now we are concentrating on North America and the G.A.S. territories where we have distribution. If we could get our records distributed in Eastern Europe we would love to promote the bands more to those countries.