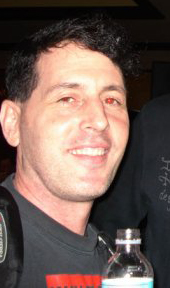 When you were a child, what did you want to be when you grew up?

I always loved music as far back as I could remember but had no idea what I wanted to do when I grew up. I had allot of interests including Oceanography and sports, neither of which I could making a living at.

What is your educational background?

I have a BA from San Diego State University but was also active in the cultural arts board including the radio station, newspaper etc....

What past jobs have you had?

I was a Club DJ, Promoter, Band Manager, Record store sales associate and worked for other Indie Labels including Wax Trax Records

What first sparked your interest in the music business?

My passion for music was always the driving force. I just needed to find my place which I did when founding Van Richter Records

Name your top 5 favorite bands/solo artists of all time

That is a tough call but I can give you some that come to mind Testify, Oomph, Trauma, Clock DVA, Swamp Terrorists

What interested you in the industrial music genres (Aggro, Electro, Darkwave, Synthpop, Noise, Ambient, etc) over other genres?

Probably the emergence of Ministry and the whole Wax Trax scene of the early to late 1980's though I was always a fan of the German music sub culture going back to Kraftwerk. I was also highly influenced by the second British invasion of the early 80's this time being the new wave scene that also included bands in most all electronic genres

You are based in San Diego, California here in the US, yet I notice most of the Van Richter bands Testify, The Fair Sex, Plastic Noise Experience, Sielwolf, Girls Under Glass and Underwater Pilots are from Germany.. care to comment?

A label is not bound by geography especially in today's world of technology It just so happens the premiere bands in the genre we specialize in are from Europe, though we are now planning to work with our first U.S. band after 16 years.

Well no scene is booming but certainly Europe has a sub culture that better supports the Industrial Music scene. I think this is more of a generational question rather than geography as the demographic that most supports the genre has aged to the range of 30 - 40 years of age There are younger scene supporters but their fan base has dwindled as each new generation comes up behind them.

How did you approach bands like The Fair Sex, Girls Under Glass, Plastic Noise Experience, etc and convince them to sign with you?

When we were a start up label in late 1993 it took money and third party license deals before we could establish our name. Once we had the first two bands (Testify and The Fair Sex) it was not too hard to approach other artists who then became interested in becoming part of the Van Richter family.

What do your parents and friends think about your decision to manage a label?

My mother was very proud of me and what I have accomplished Also just as important I have earned the respect of my peers in the music industry. Unfortunately my father has never acknowledged anything positive I have done in my whole life.

What or who has been your greatest discovery?

Every time we sign a new band it is a great discovery. The fans of each of the seven bands on the label claim their favorite as my greatest discovery. Discovery to me does not mean biggest seller but turning people onto cool music as well.

What was the best live performance you have ever seen?

Where do you see the music industry in 5 years?

The majority of all music will be only be available on line for listening as well as for sale in the digital only format. The CD will decline further to a niche minority format such as Vinyl. Only record stores that carry niche genre music or used product will be around other than rack jobbers that stock Billboard only titles.

Where do you see yourself in 5 years?

Some label managers get involved in the creative process, some are more hands off. Which type are you?

It depends on the artist. We are an artist development label first and foremost. I give each band my opinion and suggestion in the creative process as I feel necessary. Some follow my advice. I try to balance artistic integrity along with an economic sensibility.

Do you have any advice for someone wanting to start a record label?

I would not recommend it unless you are willing to dedicate your heart and soul to it as well as long thankless hours, doing the dirty work and at the end of the day not expect to make money at it. I only would recommend it if music is your passion and nothing else matters.

Do you have any advice for struggling bands looking to get their music out there?

The best thing a band can do to self promote is to tour, tour, tour! I even tell the same thing to our bands

If someone invested a million dollars into your label, how would it be best spent?

That is a first and interesting question. Maybe a Van Richter festival national tour with all our bands. (the first ever U.S. Industrial festival tour). Also probably making some acquisitions

Your website says you have a "quality not quantity" philosophy. Has this philosophy served you well?

It has been very challenging as being an artist development label is the hardest road to travel in this business as well as trying to balance artistic integrity with economic success.

Ok, I am your fairy godmother and you have 3 wishes.. what would they be? (And no wishing for more wishes.)