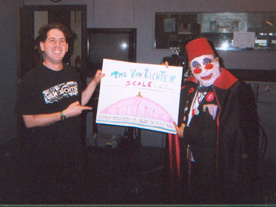 Van Richter Records is approaching its tenth year, having opened its doors in Nov.1993. With a mission of developing the careers of the leading artists in the industrial music genre. Maybe that's not such a big deal now but ten years ago that was truly underground. And it still ain't mainstream. One of the label's traits is extreme selectiveness in signing artists. It's quality over quantity here. The result is a quality roster and one that may only contain six bands but it's certainly a diverse list: Testify, The Fair Sex, Plastic Noise Experience, Sielwolf, Death and Horror Inc. and Girls Under Glass. Lest you think I lie about the diversity of the label, I'll give a quick at just one of Van Richter's artists, Girls Under Glass. Just grab, say, Nightmares, and that one disc by that one artist will convince you that Van Richter passes the litmus test of diversity. Nightmares compiles Girls Under Glass tracks from various sources and what the listener discovers is a band that does not neatly pigeon-hole. It kicks off with a wicked industrial version of the theme from the movie Halloween. New Gold Dream follows, suddenly bringing the listener into synth-pop territory. Der Mussolini is a German-language tune blending electro beats and crunchy guitar. The closest mainstream comparison I could make is Rammstein, but Girls Under Glass is far more dynamic. Die Zeit adds, get this, a Middle Eastern melody to the electro-industrial mix. And that's just the first four tracks. With flavors ranging from dance industrial to synthy new wave sounds to gritty aggro-industrial, the very listenable Girls Under Glass is a perfect example of the talent and diversity to be found at Van Richter. A broad range of industrial genres find representation under the Van Richter umbrella, including even noise and ambient along with the darkwave and standard (not standard in terms of quality) electro-industrial. At Van Richter, it's all about the music. Just because it's industrial doesn't mean it has to be an industry.