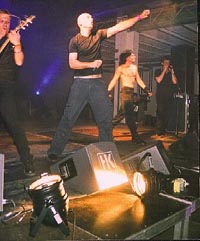 Known internationally as a premier Electro-Industrial band, The Fair Sex is now trying its hand in the U.S. market. Based in Essen, Germany, The Fair Sex has topped European charts over the last 10 years with releases such as Labyrinth, Machine Bites and Fine. The band hopes this latest release, We Are Alive, will make its mark on the U.S. charts as well as cinch a coveted spot in the history of Electro-Industrial music.

The Fair Sex was formed in late 1984 in the West German region called Kohlep. The members of The Fair Sex are Myk Jung (vocals), Rascal Nikov (master bass, programming, Blonder) and Moses W. (guitar). As for the name of the band, Myk Jung said, "The dictionary was opened on that particular page."

Myk, Rascal Nikov and Moses W. met in 1978 while attending school. It wasn't until six years later that they decided to work together, creating music "to heal the world by softening the listener's mood", Myk said. All members of The Fair Sex take part in the songwriting process, drawing their influences from the world and how it affects them personally.

So far, no immediate plans for The Fair Sex to hit the U.S. shores any time soon. In the meantime, the band is promoting We Are Alive and trying to establish themselves in the U.S. market.