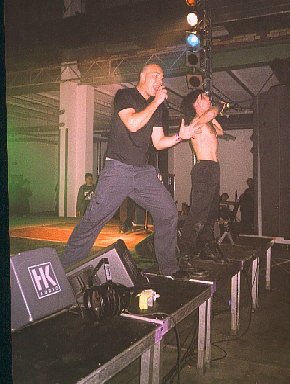 How would you describe your band, "The Fair Sex?"

Electro industrial darkwave, or some call us a more radio friendly version of Skinny Puppy. We were one of the first bands to use guitars in the scene.

What are some of your influences, musical or non-musical?

Of course the classic german noise bands, but also the old guard from the wax trax era to the commercial bands such as NIN.

How did your band get started?

We were all school mates and very much interested in programming and sampling back in the days of the 1980's when the scene was young and fresh.

In what way do you feel your band has changed over time?

There have been changes in the personnel but the main core of Myk, I and Blonder has remained. For awhile we stopped doing the band after the disapointment of the lack of response to our great concept album 'Labyrinth' back in 1995. Now we don't get our expectations so high anymore. We are wiser over time.

What sort of hobbies do you enjoy?

As germans of course we like to drink beer! The side project (now bigger than TFS - Testify) is a real party band. I only was a member for the first records 01 and Ballroom Killer

What can you tell me about your new release, "The Dark Ages?"

It is a two cd compilation of old out of print songs from our days on Last Chance Records in the 1980's, but the tracks have been remastered and we have included two brand new singles "Beautiful Nightmare: The Number One" and "Children of the Revolution" (T Rex). This is a great cover version.

Also, you have a remix cd coming soon, as well, called "Drop your Anxiety." Can you tell me more about this project?

These are out of print remixes from our most successful albums "Spell of Joy", and "Bite release bite"(singles). These are bound to be dance club classics...again.

Are there any other new projects coming up?

Where do you see yourselves twenty years from now?

In Germany still making music for the underground

How would you describe your philosophy on life?

No real philosophy. Try to do your best and take it one day at a time. Know who you are and what you want in life

Is there any advice you would give to aspiring musicians?

Yes. Do it because it is your passion but because you think you will be rich a famous.