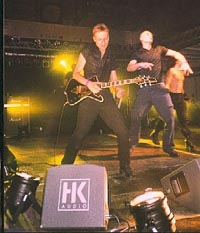 Their drummer, A Bang, died on stage, reportedly of a heart attack. They replaced him with a drum machine. But to the members of the German industrial metal band The Fair Sex, this slice of real life Spinal tap has become old news.

That was a very tragic scene" recalls Fair Sex singer Myk Jung. "And we prefer not to keep talking about it over and over again. He was a close personal friend as well as bandmate. It is patly in his memory. as well as the direction the band was going in, that we decided not to replace him.

The direction The Fair Sex (which also includes Rascal Nikov on bass and electronic programming. Blonder and Moses W. on guitars) ultimately went in is almost too complex for words. Equal parts electronica and industrial, it's a heavy smattering of metal and hard rock guitar and influences as diverse as Ministry. Skinny Puppy, and old style European Zoth Ommog bands like Leaether Strip. The Fair Sex sound, as depicted on their most recent U.S. releases Machine Bites, Fine. We are alive and the sci fi opera concept album Labyrith, is lyrically ambitious and musically a danceable and highly listenable aural experience.

We did not know this kind of music was real popular anywhere in the world", says Jung. "In Europe, what we do is more of an underground thing. What we do is not something to do with our German culture. It's just more in line with our personal experience. We have progressed over the years and over the albums. It's been a combination of things. We lived more so we have more to write about and the technology has advanced so we've been able to do more with the music.

The Fair Sex who have also captured much notoriety through their other project, Testify, formed in the early 80's through their mutual admiration of the burgeoning Goth-Dark Music scene in Germany. But while the band has had its fair share of dance club hits over the years and has released nearly a dozon albums, Jung says that The Fair Sex knows their place in the musical universe.

We know we will never be a big, successful, commercial group. We are not a pop band. We just make the kind of music we like to make and, because of that, we know we are doomed to live in obscurity. But the advantage is that we don't have to compromise our musical vision in any way.

Jung who offers that the comparison to bands like Ministry and Skinny Puppy has only helped their profile outside of their native Germany, has a good laugh at the notion that all so called 'Kraut Rockers' are dour individuals who never have any fun.

Believe it or not, we're big jokers outside of the dark world. We party a lot and we drink a lot of beer. And, yes, we love the girls.