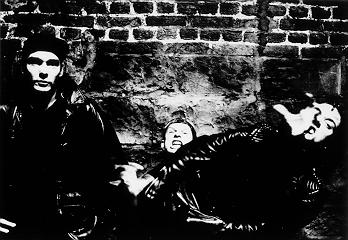 Hey there. wanna introduce youreselves to those who haven't yet heard of Testify?

Hi! Here's Myk, vox from Testify, representing the circle of Testify, a German band that creates 'harsh' Industrial Metal. At least that is what all info-sheets and reviews etc. confirm. Since 1994 we have been active in the US-scene having released several albums. Testify is a band with ever-changing line up, possibly because our electronic mastermind Mathias Black wants to hold up a strong hierarchy which permanently discourages our guitar players - so that they feel being forced to leave the band. (That statement is not meant serious, but perhaps Mathias will get angry reading it some future day; and out of this anger great creativity might result.)

Personally, i love the vocals on all your songs. it goes great with the music. What is your favourite thing about your sound? (ie what makes it unique, ect)

Thanx for appreciating the vocals. That may help me in the attempt of keeping the job. But to me the way how we treat the guitars seems to be of equal importance as well as the atmospheric noises, for example. I think no special feature is more important than the others. It's the mixture of all. Nevertheless I have favourite TITLES within our catalogue; but I will spare the reader from my listing them all up now... Only this: my personal favourite from the forth-coming album "Triviality Beyond Acceptance" is probably "Under The Cold Moon" followed by "Grinning Sun".

Do you want to remain in the underground scene, or make it like the "big" stars on MTV?

The past has shown that it is not that relevant what our personal plans and strategies are: destiny has always a different path for us in store. So we have stopped making that kind of plans: We just gather our best ideas and try to make the best titles possible out off them. Sometimes I think we succeed in trying this.

How have your fans, friends and family been about your band?

As you might imagine the reactions differ quite a bit; but that will not be a specific Testify feature: Some want us to keep up our style without the slightest changes. On the other hand we meet people, even close friends, that keep telling us: "Aaahr! Will you not start to create more softer, "ear-smoothing" music, he?!"

Is there a specific style you guys aim for when you write music?

Everytime when we write music we are exclusively in the proccess of creating that particular title we work at: We have a vision of how this title has to so und in the end - at best. But that's all. And in order to find the very first idea we just play with guitar riffs or noise-samples -until we find something interesting. Quite aimless. As we are in general.

Do you think anger is an element in your music?

Yeah, the old anger-theme! A very important element within Testify's ideology. Perhaps you will agree that this world is not free of phenomenons that might make you angry?!

What 6 cds are in your player(s) right now?

Your lyrics are incredible. what kind of things inspire them?

I always start with pure intuitions brought about by the suddenness of the moment, brought about by the pure acoustics of words - which sometimes make no sense at all. I always record this very first ideas. In a longer proccess I try to figure out which existing word may replace the imaginary word - and slowly I start to recognize the path which mere intuition has laid before me. And I try to accomplish the lyrical construction as well as I am able to.

Well thanks a lot for the interview, i wish you great luck :o) (you can include any concluding statements/comments here)

Thanx to you. Good bye for the moment being. Let us hope that this year 2001 will be one of the greatest in all our lives.