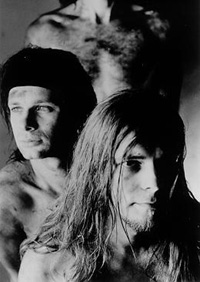 One of the most visible means by which sub-cultures identify themselves is through the music they listen to. Which, if any, subcultures constitute the majority of your fans and why? Why (besides your good looks and ever nimble wit) are they attracted to your music?

Most of our listeners seem to derive from Testify sound the angry-rebellion-aspect or whatever it might be named. Most of them seem to be offsprings of the ever dark-clothed Industrial scene. But who can tell why they are attracted to our style? Are they attracted by the one-dimensional dark avenger-thing that is Testify theme? If they understand that Testify do not celebrate wickedness itself, although making this wicked sound, it would be good.

Your music is a clear statement of dissatisfaction with the global state of affairs from international politics, through environment, to issues of race and personal politics. You music contains a lot of anger and a visceral call for revolution. Please name 3 basic things which you would recommend people do in their day to day lives to correct some of the problems we, as the human race, face today.

We only try to describe these statements you luckily discovered. And the basic forces driving us to our statements is the abhorrence at basic mischiefs that are born out of the human habit called contempt. That makes us boil with hot anger. To give precise recommendations concerning evry day-life would mean to advise out listeners to share in social work of more compassion, or so. Three basic things? Fight against racism. Fight against your personal lethargy. Fight indifference. As you see: That sounds very phrase-like. So we prefer to narrate our weird tales.

The music of Testify, as well as other industrial music has had a very strong attraction for the societally disenfranchised, people living alternative sexual life styles, and in general, the intelligentsia of this generation. Musical styles change with time. Will Testify always be an aggro metal/industrial band, or will you eventually evolve into something else? What will be the new musical alternative in the beginning of the next millenium?

Testify belongs to the league of musicians declaring their anti-attitude to the White World Wankers' world; and there might be numerous musical manifestations of attitudes like this. What will be the proper musical construct for the next millenium? Prodigy? Ministry? Something else with y? Testify? - We have got an y at the end of the name, at least.

Mc Morality is probably more stronger in the US than in old liberal Europe - but nevertheless conservative energies are everywhere. So struggle with the Mc's and reveal what their function is: to wreck nerves - and to lessen the pace of mankind. Our work has not been perceived by this paltry kind of humans: We're yet to small to threaten their mentally weak construction of society, I fear.

If the medium is the message, what is your opinion of music sales through the internet, MP3, etc?

In this point we belong to the kind of humans devoted to that paltry conventionalism: the temples called record-stores shall live on.

Tell us about your new disk.

Crack The Mind consists of two very different sides of Testify: While the four remixes stress the electronic side of Testify, our new five titles belong to the more metal-bound regions. Guevara is the band-intern favourite. That represents Testify 1998 in pure form.

Will you be touring in Canada in the future? If so where and when?

That is uncertain. Let's wait and see.