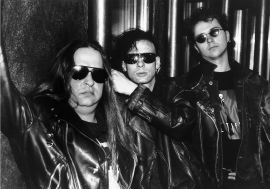 Formed in April 1994, Testify has been creating material that embodies a new direction in the industrial/computerized metal genre. Instead of repeating successful ideas introduced by other bands, Testify introduces their own ideas on the genre. Testify is based on the creative work of Myk Jung(vocals, progs) and Moses W.(guitars, progs). Their second full - length release, "MMMYAOOOO", culminates the development of Testify from a side project into a full - fledged band. "MMMYAOOOO" is co - produced by Adam Grossman, singer/guitarist for Skrew and recorded by Mathias Black, the third respect of Testify.

Miki Griesbauer: "MMMYAOOOO" is your latest release. How does it compare with your first?

Myk Jung: The second album has got a touch more metal in it, compared to the debut. It is somehow thicker, with more insane - strange atmospheres, I would say. This is mostly due to Moses, for the first time guitar - chieftain on a whole album; but also due to the influence of Adam Grossman of Skrew, who helped us realize our ideas.

Miki: What are some of the tracks off "MMMYAOOOO" that appeal to you most?

Myk: I fear that some of the tracks I like best on the new album are not that representative. "Quest Of Nothing", for example is a kind of dark ballard (totally new territory for Testify) and "Dumb" walks somehow Hip Hop like rhythm regions (with the very uuaghrr - vicious atitude, of course!). The titles that reflect the "classical" Testify style are "Pink Goblin", "Queen Whore" or the brutak speed title "Trash 21"

Miki: How would you describe "MMMYAOOOO"

Miki: Why did you choose "MMMYAOOOO" as the title for your release?

Myk: It was obviously a very good choice, because so many people pay attention to it, being somewhat puzzled or whatever. Moses made a list of some interesting title proposals and in the end, we chose this weirdest piece of all panne-ideas: MMMYAOOOO, the scream of mild enthusiasm.

Miki: Any tours in support of the album?

Myk: We fight for the right to tour - the right to party we lost some years ago, to that time when we ran out of all wits and founded Testify, and that's the sad truth.

Miki: What do you hope to achieve with "MMMYAOOOO"?

Myk: The first master plan was to rule the world, but later we had to correct the course. Now we are grateful to find some listeners,four, perhaps.

Miki: How long did it take to record the album?

Myk: It took some time compared to our first release. All in all, with writing, arranging, selecting, recording, mixing.... it was more than a whole fucking , wasted lost year. But we are willing to do it again.

Miki: How do you decide what would be on the album?

Myk: These are the eleven titles we prefered of perhaps sixteen that we wrote between November '94 and late '95. Not included are the many ideas which were never more than hasty ideas bound to oblivion. How do we decide? We don't have a complicated strategy. We go on working on the titles we like best.

Miki: What are some of the influences that inspire you?

Myk: One very important influence is our first album. That gets ideas going in the fashion... "Ooh no! There must be ways to do better!"

Miki: What are some of the future goals of Testify?

Myk: Perhaps one of the goals should be to find some kind of middle - course between four listeners and the