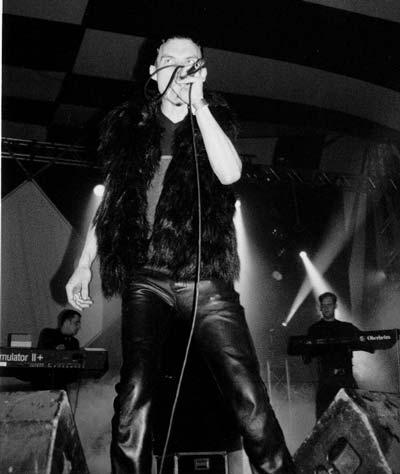 Wednesday: How are things going for the Plastic Noise Experience [PNE] in 2005?

Actually it is Stephan M. Kalwa (Your Schizophrenic Pal) answering your questions even though Plastic Noise Experience does not musically exist as the same band anymore but since 'Noised' was my partnership with Claus the label thought it would be appropriate for me to answer your questions.

Wednesday: Please tell us a little bit about PNE and how you came to form the band back in 89.

We met in a small discotheque in Mindon, which is our home town, and got to know each other in late 1989 and realized we were on the same wavelength. We talked about music and whatever then planned to get together and start experimenting on a musical project. We made some experiments together and noticed that we liked the results and so we called our project Plastic Noise Experience and that was all.

Wednesday: Has the band changed much over the years - if so, in what ways?

Wednesday: How will PNE change in the future now that SM Kalwa is no longer apart of the project - are there plans to continue on as PNE or do you have other projects in the works?

This is why I am answering your questions to clarify the situation. I left because I was discouraged with a dying EBM scene which we started in so long ago but still remain in obscurity because of the small amount of fan support. Again Claus has turned PNE into his personal solo project which is completely devoid of the special signature sound we made together. The press always compared us to the older works of minimalist stripped sounds like Front Line Assembly. Unfortunately that is now gone after 'Noised' forever.

Wednesday: What is the music scene like in Germany for Industrial-based bands?

Sadly like the states (I hear) we are facing ultimately extinction of the genre because people don't support the bands (in any genre like they used to). Now less bands want to create music worldwide because they can't make a living which is a sad thing to say the least.

Wednesday: Have you been apart of Maschinenfest or any other festivals in Germany? If so, what was the experience like? If not are you planning on playing any festivals in the future?

Very good. Definitely the European Festival scene has helped the underground sub culture survive until now. Also other great festivals we have experienced are Euro Rock and Wave Trekken.

Wednesday: Tell us about your last release "Noised."

The first twelve tracks are from our import release "Rauschen" which has been out of print since the 90's. The next six songs are titles we worked on but never released before including a cover version from the movie Hellraiser III which was originally recorded by Motorhead. The "Rauschen" titles were also remastered for this special last PNE release

Wednesday: What other albums have you released in the past and how are they similar or different from "Noised"?

I personally like the "Rauschen" stuff very much. It let me recognize some "Jesus and Mary Chain"influences, ok they made guitar-music, but they had their place in my life and even people who don't listen to Electro-music can see this. 'Noised' certainly is a more aggressive release than our past titles.

Wednesday: How did you come to be involved with Van Richter Records?

Van Richter initially worked with the now defunct KK and GA Records to get our music recorded and released in North America. Thereafter Van Richter worked directly with myself and Claus to get new titles recorded, released and promoted.

Wednesday: Do you celebrate Halloween in Germany, if so how is it similar/different to how we celebrate it over here in North America?

I am told we have some very different customs regarding Halloween compared to America as we don't do the trick or treating as you do as well as not all our events are meant to frighten people. Of course Europe has a long history of horror dating back to Romania etc....

Wednesday: What are some of your all time favorite horror movies and what are so me of your favorite characters from them?

Hellraiser, The Exorcist, Last House on the Left. The older horror classics from the 70's and 80's in my opinion have the best plots. Pinhead is an all time favorite character.

Wednesday: What is the scariest thing that has ever happened to you personally?

I found a close friend dead after he committed suicide.

Wednesday: Do you have any haunting stories you can share with us?

Wednesday: Thanks for the interview. Where can our readers go online to check out your works and how can they get in touch with you?

Go to www.vanrichter.net/pne.html and send email from there under feedback.

Wednesday: Any final last words for this interview?

Please support the genre and all music before it goes away for good.