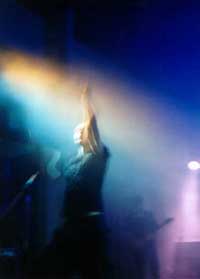 Into the Labyrinth with The Fair Sex

Piercing the earth's atmosphere as sonic waves of sheer electronic bliss, The Fair Sex embark on a cyber world of exotically dark visions where man & machine are meshed into one entity. On their newest release entitled "Labyrinth", the listener is taken into a musical realm where eeire sound structures paint a dark picture of the electronic music hemisphere. While menacing keyboard sounds & samples sweep through the mind's eye, expertly arranged melodies & amazing song writing techniques are masterfully executed throughout. Every track, unique in character & arrangement, takes the listener along an amazingly energetic path of musical ecstacy where every synthesized tone creates an atmosphere of its own.

The Fair Sex really shines through among their counterparts in their expertly delivered melodic songwriting and the bands innovative production techniques. Since the band is always searching for ways to expand their horizons, two members of The Fair Sex teamed up with fellow musicians to form yet another musical entity with a mind all its own. Enter the mind bending music of Testify !

While maintaining the same excellent keyboard programming & production values as The Fair Sex, Testify adds some heavy guitar chords and vicious vocal treatments that culminate in an aural frenzy of unlimited proportions. An interview with Testify's lead guitarist & programmer, Moses W, brings the bands artistic vision into focus. In explaining the origin of the band's name, Moses states that "there is no relation between the band's name The Fair Sex and their music." He elaborates on the recording of "Labyrinth" by stating that "Myk and Rascal performed most of the work while additional work on the production side was given by TRIK3, Ramon Creutzer and myself". With live performances playing a big part of the bands efforts, "intensive touring was done throughout Europe; the biggest performance being the Zillo Festival in Russelsheim/Germany with well over 5,000 visitors".

"Layrinth" is not only a musical adventure, but also a story as well. Moses explains that "the story appears in the German version of the CD booklet and is based partly on science fiction. It is an essay that describes the life and the suffering of Tancer, a young hero, who is always restless, never satisfied." In addition, "the Labyrinth is the place where different figures and situations occur to him." In essence, the "Labyrinth" can be a unique place to every person experiencing this album's full potential aurally & emotionally.

When discussing Testify, Moses contends that "Testify came into being as a side project between Rascal and Myk, two members of The Fair Sex. At present, the lineup for Testify looks like this: Myk Jung - vocals, voices, samples, programming, Moses W. - guitars, sampling, programming, backing vocals and Mathias Black - sound engineer and producer. All of the guitar playing for Testify & The Fair Sex's Labyrinth was perfomed by me. Even when the sampler was used, it was always real guitar playing on the first line."

In discussing the bands German fan base, Moses explains that "the scene is very active but the fans seem to a little old fashioned and tend to always support the older stuff. In some cases, it is difficult to to make them open up their ears and minds; this is especially true of some for some of the heavy-metal headliners. To me, it seems that they don't recognize that even their old heros are using samplers and computer sequences nowadays." This certainly holds true for such rock staples as ZZ Top, Billy Idol, Queensryche, Pink Floyd, Queen and numerous others. There are some campaigns in place to help listeners open their minds to this style of music. Moses states that "several metal music magazines have started campaigns with the intention to convince readers to listen to new types of music. There are enough hungry hardcore computer metal BPM maniacs around here and the feeding has begun !"

Undenyably, electronic music has come of age alongside home computers, the Internet and the recording studio's innovative musical production techniques. Will Testify ever bring their sonic blast to a live setting here in the United States? Moses explains that "there are plans for a future U.S. Tour with Skrew, who's member Adam Grossman is currently engaged in the coproduction of the next Testify album." Some of Testify's influences include AC/DC, Kiss, Pantera and Clawfinger on the guitar side with Kraftwerk, Ultravox and Jean Michele Jarre on the electronic side. It is these diverse influences that provide Testify & The Fair Sex with the angst, energy and precision necessary to create their avalanche of musical soundwaves. The band uses the latest in sequencing software (Cubase) & keyboard technology to manufacture their sonic boom. Moses elaborates by stating that "most of the drum sounds are sample based but we use a live drummer on stage." In terms of near future plans, "for Testify it is the new relase that's knocking on our doors and the live appearance planned for 1996!"

While most U.S. artists (with a few exceptions) continually churn out the same old guitar heavy, boring, predictable material album after album, The Fair Sex and Testify aim at the endless struggle for artistic growth, innovation and evolution into new forms. Bands, like other art forms, should always strive to expand their horizons and enter uncharted musical avenues. Artists with this unique vision draw the listener into an ever changing expanse of sonic textures and mental images that provide an escape from the mundane routine of everday life. With electronic music and computer technology gaining momentum at blinding speed, artists that harness their power will inevitably make their mark on the future of musical exploration well into the next millenium.

Back to THE FAIR SEX or TESTIFY page.