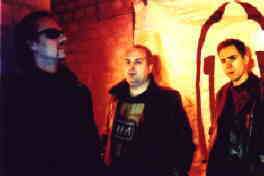 I love your rendition of Madonna's "Frozen"? What made you decide to use this particular song as your opening track and name of the record? Would you consider yourself a fan of her music?

No, we are not really fans, but after covering many songs from the 80ies it was a big challenge to try a very new song. In our view Madonnas "Frozen" is on of the best popsongs of the 90ies. That was the reason why we tried a GUG-version of that. If we had the impression that we failed, we would not have released it. So we are very lucky with this version

With "Frozen" being your second release here in the US, do you think the band is finally garnering a broader fan base? How do we compare to your fan base in Europe?

Sorry, I have no idea about the US scene and if we have fans there. I have practically no information about what is going on in the states. I only know that there are many european, i.e. german bands who are doing quite well in US.

Is Girls Under Glass considering performances abroad to help promote the album? Which bands are you interested in touring with?

Yeah, we will do a tour in February in Europe to promote our new album which is just out for 1 week in Germany.

What highlight performances have you done this year?

Wave Gotik Treffen in Leipzig in front of a couple of thousand of people. It was very successful and we had very good reaction for our new material that we presented exclusively to the audience at that festival. That's the only gig we are doing 2001. 2002 we are getting more live-active again.

The band spans over one decade of recording and performing music, so how many albums have Girls Under Glass released and which do you consider your best?

We have released 10 studio albums plus a rarity album plus a live album, plus Nightmares for USA. So all togther we have released 12 album CDs in 15 years...not bad, ey? I don't know which is the best one. They are all good in way. I think my very personal favorite is "Equilibrium", because its very intensive and atmospheric and dark.

Will your un-released albums in the US ever be re-issued and distributed here?

I have no idea. Its a point we have to discuss with our US partner in the near future.

What can fans expect when listening to your music? When I listen to it I feel a great deal of emotion.

Oh, thats great, because we want to transport emotions and feelings. I think we do very emotional intensive Electro Wave. Sometimes its danceable, sometimes its quiet and atmospheric, sometimes it rocks like hell. GUG never stood for one certain sound. We like to work and experiment with different styles of music and musical influences from different decades.

The artwork of the album aptly ties into the name "Frozen," though I presume it has other significance? Can you expound on this?

Van Richter choosed the single artwork. Ask them. I think it fits well to the title, but on the other hand its a very simple translation of the name "Frozen", so I don't see a very philosophical statement behind it to be honest

Do you write the lyrics for all the songs? What sorts of things help bring your words together?

Have you ever thought of writing poetry based on your vocals and releasing them in a booklet? I love your lyrics and style of writing them!

Oh thanks alot. After all this nice compliments I start to wonder if you are a guy or a girl. In most of our original CD booklets we printed the lyrics. But: lyrics are not that important to me, although I try to express myself in words as good as I can. But in general I see myself more as a musician and not as a poet.

How long has this line-up been together and how did you all meet? You joined after the second album "Flowers" was released and former vocalist Thomas Lucke departed, correct?

No, not correct. I was founding member from the first hour on, but you are right that I changed from guitar to the microphone aftre Tom left GUG in 1989. Since then we have a stable lineup of 3 people, but we work together with several different guestmusicians, such as people from Cassandra Complex, Wolfsheim, Project Pitchfork, KMFDM and others.

What other groups inspire you?

We are not inspired by other groups, I think we are more inspired by certain feelings that are standing for a certain decade, like New Romantic or New Wave in the early 80ies. Its more a spirit that influences or way of songwriting. If there is an artist that influences me personally a lot when I write melodies its definitely Gary Numan. But that's it.

The Das Ich re-mix of "Wings" is superb. How did this collaboration with Bruno Kramm come about? I am a big fan of that band as well.

He is a friend and if you are a fan of Das Ich you might have noticed that Girls Under Glass did a remix of some of their songs as well (I think it was "Kain & Abel"). We often change remixes with other bands. We also did mixes for Pitchfork and Wumpscut and many other stuff.

I really liked the vocals of Peter Heppner from Wolfsheim in "Grey in Grey." Have you worked with him before and would you consider using him again. His vocals beautifully compliments the music on that song!

Oh, this collaboration happened awhile ago. We are still in contact with Wolfsheim. Axel is working with them on their new album and is also involved in their biggest hit "Sparrows & The Nightingales". Wolfsheim are really good friends of us as well. You see...its a big family here in Germany and many of the really good bands come from Hamburg.

What are some things you would like to do with Girls Under Glass that you haven't yet?

That is a very difficult question. I think I would like to do some film music and play this stuff live in front of a mega-big screen. And of course we would like to fill Madison Square Garden..har,har..oh jesus..there is so much to reach in life. Let's be realistic. I am lucky if we get another good record together. It is the music that counts for us. Not the hype or the sales...okay...the sales as well.

How is the music scene in Hamburg, Germany these days?

Hamburg is great!! There are so many good bands in Hamburg. Hamburg is no.1 regarding musical output and successful bands. I love Hamburg.

You all have other current projects outside of Girls Under Glass. Can you tell me about them? You are still in Cassandra Complex right?

I am still in Cassandra Complex after 11 years. Rodney still lives in the states, but it looks like he is coming back to Hamburg, so we have much more time to work together on new stuff then I hope. Apart from that I am also singer of the GUG-sideproced Trauma, we are just writing a new album with. I hope you know Trauma. If not, listen to it. It's worth it. It is a brilliant piece of dark electro music.

What is the band currently working on?

We are working on promoting and market our new german release and parrallel we do a new Trauma record. From January on we will prepare the GUG tour and start to rehearse. Thats all we are doing in the moment.

Thank you for your time. I wish you much success and please stay in touch. Any ending words for the readers?

Visit our website at http://www.vanrichter.net/gug.html and be welcome to share your thoughts about our music. You will find much new information. Anyway..thanks for the interview and hopefully see you and the readers live some day. Yours Zaphor