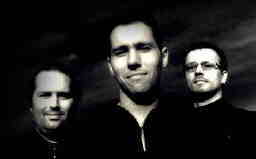 Could you give the readers a short biographical background on the band?

Sure here is our chronology before signing with Van Richter Records in 1998.
1986 Girls Under Glass were founded by Thomas Lźcke (singer), Hauke Harms (electronics & keyboards) and Zaphor aka Volker Zacharias (guitars)
1987 first record was recorded: HUMUS For this record Dr. Fluch joined the band and played the bass guitar.
1989 Girls Under Glass supported bands such as Fields Of The Nephilim, Red Lorry Yellow Lorry and were just big stars in the german gothic-wave-scene. At this point of time the band was playing togther with two guest musicians (Marcel Zźrcher, drummer of AbwŠrts, Schwansee, Shanghaid Guts) and Olaf O. (Bassplayer)
1989 FLOWERS (second album was recorded). Members: Thomas Lźcke (vocals) Zaphor (guitars) Hauke Harms (keyboards), Axel Ermes (bassplayer). Axel joined the band and was integrated into the real band-line up. Axel and Zaphor played at this point of time parrallel in the german cult band CANCER BARRACK
1990 Axel and Zaphor left CANCER BARRACK and concentrated on the third GUG album. Main singer Thomas Lźcke left the band and Zaphor take over the singers part. Rodney Orpheus of THE CASSANDRA COMPLEX produced the third GUG album called "Positive" and started a friendship with Zaphor. Zaphor joined in THE CASSANDRA COMPLEX studio and live-lineup and is still working together with Rodney these days. This year was really a year of changes and re-starts. PROJECT PITCHFORK were playing their first Gigs as support band for the Positive-tour.
1992 DARIUS the 4th album was recorded. This is the first record recorded with a real drummer (Marcus Giltes, ex PINK TURNS BLUE). As a new guitar player Girls Under Glass welcomed Raj Sen Gupta.
1993 CHRISTUS was recorded, also with Raj Sen Gupta plus Markus Giltjes. For the following tour Raj left the band and Girls Under Glass were working with Robert Wilcocks of SLEEPING DOGS WAKE & COBALT 60.
1995 CRYSTALS & STONES was recorded as a trio again (Zaphor, Axel, Hauke. The band recorded this record in their new own studio. Die Krupps did a remix of Die Zeit, which became another big club hit in Germany). For this record the band was touring with Robert Wilcocks again. Additional drums on tour were played by Tippi Agogo (musician from Vancouver and close friend to the Legendary Pink Dots and Skinny Puppy musicians-scene)
1997 FIREWALKER was recorded. The hardest record GUG did ever. Totally inspired by the american industrial metal & electro music scene such as NIN, KMFDM, Stabbing Westward, Gravity Kills etc. Girls asked ex KMFDM drummer Rudi Naomi to join the band for the tour. GUG toured together with Deathline Int«l, an german-american-electroact.


I know most musicians don't like labelling their music but could you please give a description of your music to those who haven't heard it yet?

Though we are grouped in the Gothic / Darkwave subgenres in Europe and America our sound is very unique with a signature all its own. We are a hybred band that also incorporates Aggro and Industrial as well as 80's wave hooks. If you are a fan of any of these genres then you will love our music.

What are Girls Under Glass up to at the moment?

We released a great piece called "Nightmares" when we signed with Van Richter Records in 1998. The record combines a "best of" record with unreleased material, out of print material cover versions and new songs to capture new and old Girls Under Glass fans. Also Van Richter Records was kind enough to remaster the whole package so everything sounds very fresh on the technology side. Now we have a new record coming in the new year called "Frozen". Thats right the same song done by Madonna! Also the record has a remixe by Das Ich and a duet with Wolfsheim. Hopefully this will be the record that breaks us out of the underground to the mainstream where we deserve to be.

What do you think of your label Van Richter Records so far?

They are fans of the music first before they signed us. This makes a big difference as we are one of only six bands on the roster so we are all top priorities. They are passionate about the music and what they do. By far they have done more for us than all the European labels we were on in the past on combined! They have struggled right along with the bands to make this niche genre known in a tough market. In short they are doing a great job!

Why did you, as a band consisting of only guys, choose the name Girls Under Glass? Was there any thought behind the decision?

It's a name and it means...."Nothing". It has a flow and doesn't give you automatically a direction of what is behind the band. For example Fields Of The Nephilim, Dark Days Of Doom, Creatures Of The Night, Blah of The Blah and all these other cliche-names are telling you straight away what's going on music-wise. I think this is boring. Girls Under Glass stands for open-minded people that are doing open minded music. Why should I choose a name that implicates a certain kind of music???

I understand you weren't very happy with the way Nuclear Blast promoted your album "Firewalker" in the US. Have you had any luck on the American market since then?

Nuclear Blast first of all is a traditional metal label. Second they had no real U.S. presence and I understand the few people they had have now been folded into Century Media as basically a license deal for the U.S. market. Even though we were on the Deathwise sublabel for one record they really never supported either the sublabel or genre we were in to press. radio or retail. Van Richter Records has basically had to start from scratch and as we said already they are doing a good job for us as it is very difficult to get known in the states even with radio, press and retail.

Your lyrics are very diverse and deals with everything from love and death to intrigues and politics. What kind of thoughts do you have about the German society in general?

We are very much interested in life, art, communication, parties, sex, films, work, challenges, experiences etc. Of course all of this is influencing us and influences our way of thinking and living. And our music is a mirror of that.

I know the band members have studied, could you tell me a little about your studies?

Studies? Nothing significant to speak of. None of the guys have PHD's in music even though Axel has invented Midi Equipment that we use as well as he built for Die Krupps.

Are the band members involved in any other bands or projects apart from Girls Under Glass?

Side-Projects and relatives:
Trauma (Hauke Harms and Zaphor) were founded 1993. Releases: Fractal 1 (93), Construct (95), Phase III (99)
Cassandra Complex (Zaphor joined the band 1990 and is still playing with them)
Cancer Barrack (close friends of GUG, Zaphor was singer of Cancer Barrack from 1989-1990, Axel was founding member of Cancer Barrack and left the band 1990)
REC a one-off project founded by Peter Spilles of PROJECT PITCHFORK and York Eysel of LOVE LIKE BLOOD (Axel and Zaphor playing several instruments on several songs)
STILL SILENT (Mindy Kumbaleks project. MINDY is keyboard player of GOETHES ERBEN, theatre music act, cult in germany. Zaphor playing guitar on several tracks.
Musicians from many german bands join in the project NEFKOM (Axels project together with Markus Reinhard of WOLFSHEIM. 100% electronic music, inspired by Kraftwerk). Founded in 1995, two records Traum-B (Axels and Haukes Goa, PsychedelicTrance-Project) founded in 1998, compilations and live gigs. No album out so far.
NEUSTART followupband of NEFKOM together with STALIN singer Christoph. Crazy, weird music with even weirder lyrics that would definitely be on censorshiplist in the USA.

Your best or funniest touring memory?

The morning when had breakfast with Gary Numan, he asked me how my concert was and how the name of my band is, I told him it's Girls Under Glass and he said "great, I know you for years. You did the cover version of "Down In The Park" six years ago. I have two tapes full of music of your stuff. It's brilliant"!!! I know, it sounds like a dream, but it was the truth! I was doing promotion and marketing for the "Exile" album at that time. I didn't tell him that I was a big fan at the beginning unless he outed me as the singer of GUG. Luckily it didn't impress him too much.

Your worst or weirdest touring memory?

My gig with Cassandra Complex in Spain was the weirdest one. After twenty minutes all instruments and channels were crashed and we started a bullfight on stage, were jumping in the audience dancing to our backing tapes, kissing girls, getting wild. The crowd was totally into that. That was super-sexy and wild. Around six chicks were grabbing Robert Wilcocks (the other guitarplayer) trying to rape him (I'm NOT kidding here). The local promoter had to stop the whole thing, because the whole situation was close to be turn into a big group-sex-swinger-party. We were thrown out. This is a true story!!!

Your top five bands ever?

The music industry in Germany is huge compared to most other countries. Do you have any ideas about how this has happened?

Germany is the largest industrial nation in Europe. Further we have a subculture that is strong in our country that supports underground bands. Also Germany has a large network of festivals that up and coming bands can play /tour unlike the states. Therefore we have the infrustructure in place not to mention the clubs etc... that support the growth of music on both the major and independent level.

If you were to choose just one, which of your albums are you most satisfied with and why?

"Frozen". Because it captures the best of the evolution of Girls Under Glass in a small package with no filler tracks, that is tight both on a musical and technological level.

Yes, buy our records! You can do so by going to our label website http://www.vanrichter.net Also all the latest Girls Under Glass activities are listed there as well as this interview. You can also listen to all our music online there before you buy it.