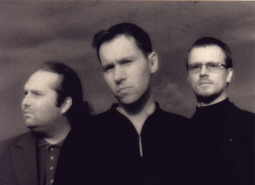 Girls under glass have been in Existence since 1986 What has been the secret of bands ability to be together for such a long time.

Before you began Girls Under Glass you had a band called Dead Red Roses what sort of music did you play?

It was a kind of slow version of Sisters Of Mercy, with keyboards, drum-machine (not faster than 80 bpm !!!), guitar and vocals (singer was Torsten Hammann, who later was frontman of CANCER BARRACK)

What instruments and equipment do use?

We use all kind of instruments. old synthesizers like the Korg MS20, MS50 and Poly-6, the Moog Prodigy, Roland SH-101but also modern machines like the Akai S-6000 sampler, Access Virus,Yamaha AN1x, Access SuperNova, Virtual Instruments for our Cubase program and so on...beside all these electronic devices we of course play guitars and basses and drums. We have our own studio in Hamburg, so we need to have a lot of equipment.

What creative process do you go through when composing your music?

I don't know. We never watch this progress such analytical...

What inspires you when you write your music and lyrics?

Are you influenced by books or movies or plays?

When you get the time what music do you all enjoy listening to?

You all are involved in several other band projects such asTrauma, Cassandra Complex, Neustart, Cancer Barracks, Rec., Still Silent, Nefkom. When did they all begin? Which Girls Under Glass members are part of these bands? What was the inspiration behind the band Projects?

We just love to make music with many different musicians. that's all. We have so many ideas and it is impossible to concentrate on only one band, because we had to bring out a new album every three months, so we decided to split up our creativity to different projects. There also might be another reason. We actually are one of the bands who really CAN play their instruments. that means if some friends want to make a band or a CD it is easier for everybody to ask us, because we know what we are doing than to ask somebody else who looks pretty cool but doesn't have any idea how to hold a guitar...

Your music has many styles of sound. To people who may not of heard Girls Under Glass how would of you describe it to them.

It's green with some red bubbles in the middle. around the corners there are little pieces of blue jelly and on top of it all there is some black sugar added to the white chocolate chips.(joke)

You have produced many albums and singles, has there been an album that you really enjoyed producing?

NO, we didn't enjoy any production... !?! okay, that was a joke,... I don't know how other people do their jobs, but of course we enjoyed EVERY album...

In 1997 you produced the album Firewalker which is very aggressive in sound. What was the motivation behind this album? I also understand that you are not very happy with this album.

Who told you this shit ? who said that we are not very happy with this album ? total nonsense. We love firewalker. it is the best album ever made in universe... em, ...well. okay, to be honest, We ARE not very happy with it, but only because this is the first and only GUG album which was produced in less than two weeks. we were very angry about the idiots in our old record company at that time, so we were very very aggressive and Volker took his old leather jacket from his Punky times and wore it during the vocal recordings... I personally think the album is not too bad, but Volker and Hauke don't like it at all.

How has the response been for Equilibrium?

We had a very good response. the people like the idea of going back to the "good old times" again and they also appreciate that we again gave some younger singers (Jenny Kahler / OBSIDIAN and Sandra Bammer / SISTER.MY.SISTER) a chance to participate on this album. (We did this before e.g. with Peter Heppner / WOLFSHEIM in 1991)

What was the inspiration behind Equilibrium?

We just thought about our early days and suddenly got the idea to record an album like in 1998 again, playing everything live in the studio, not too much quantizing on the sequencer lines and just let it flow as it comes...that was big fun and the atmosphere in the studio was fantastic. every day people came in and sat down, drinking beer and smoking some joints while listening to our new songs... it was great.

How long did it take to produce Equilibrium?

Six months from the first idea to the last mix-down.

You have female vocals, Jenny Kahler of Obsidian and Sandra Bammer from Sister My Sisters. When did you meet them and will they be involved on future albums?

I don't know yet what will happen on future albums. Both sent a demo-tape to us and we liked their voices. Sandra also is a very good songwriter (she wrote two songs _ Love Is... and Wings _ together with Hauke and me for Equilibrium)

I don't know him personally. his name is roger and he works for Hall Of Sermon. The main idea for yin and yang came from a friend of us, Reinier Kahle from dutch band Angels & Agony

How did you go about releasing Equilibrium on Hall Of Sermon?

We have been searching for a new record label for Germany and Tilo Wolff wanted to sign us. He was a big GUG fan in the past, so we thought this might be a good idea.

In The USA you have a compilation out by the name of Nightmare. What understand, it is an anthology of Girls Under Glass. It has been released by Van Richter. How did you meet Paul from Van Richter Records?

I never met him. Volker made the contact as he was a big fan of the first Trauma record on Machinery in 1994.

How successful has it been the US?

Huge!... compared to our last release Firewalker there

One of the many facets I have enjoyed about Girls Under Glass is the diverse sound and power of the lyrics. You have developed many of your own styles. What will the next album of Girls Under Glass sound like?

You will have to wait for Frozen!

Where have you toured, are you planning any up and coming tours?

We toured everywhere in Europe (France, Spain, Italy, Greece, CSFR, Sweden, and of course Germany).but there are no tours planned for 2000 so far.

What gigs did you enjoy the most and what was the audience response?

One of the best audiences was in Barcelona / Spain. We also liked the gigs in France, especially in Grenoble where a fashion show was before our gig, and all the beautiful models in their leather, S&M, fetish look had to dress up in our backstage room. You can imagine that I had to tune my guitar every 5 minutes before the show... ;-)

What gigs did you not enjoy?

Mengen (near Stuttgart / Germany) was terrible. also our gig in Paris in 1996 was not very good, another gig at the same place was okay until the backstage room burnt down and the whole building had to be evacuated...

Is there anything special incorporated within your performances?

There was... we were using fire in the beginning, but after the success of Rammstein, it would look ridiculous to use our equipment again. It is kind of toy version of Rammsteins show...

When you have a performance what goes through your mind when you are on that stage? What is it that you feel? What sort of emotions do you go through when the eyes of the audience are on you?

I always think, why the hell does this fantastic looking girl in the second row only look at our singer. That guy is married... !!! I am not, I am free !!! I WANT A BLOW-JOB !!!

What memorable experiences have you had when touring?

Beside the burning venue, we also had some strange experiences with police in Switzerland. We had some car-accidents, one emergency-landing on a flight to Brussel and, ...well that's it as far as I remember.

In 1995 Tippi Agogo toured with you how did he become involved with Girls under Glass?

When we were looking for a drummer for a German tour we got to know him through Rodney Orpheus/The Cassandra Complex . I also knew him from some concerts I made as guitarist for The Cassandra Complex in Canada in 1994. He was doing the support on some gigs. he is a really nice guy, a bit crazy perhaps, but a very good musician.

In 1989 Girls under Glass toured with Fields of The Nephilim and Red Lorry And Yellow Lorry what was it like touring with these bands?

I don't really remember. the only thing I know is that Fields Of The Nephilim were stupid assholes who thought they were the GENESIS of GothicRock. Idiots! Drug-addicts! Stupidity in perfection. Red Lorry Yellow Lorry have been very kind to us, Chris Reed was also a stupid drug-addict but very polite...

In which countries do you receive the most response from?

Of course Germany, because this is the biggest market for us. But also from Spain there are coming many letters and emails.

I understand you run a company called B.E.A.C.H Musikverlag, could you tell me more about it? You also do work for Aragon records what is your involvement with Aragon Records

Yes, that's my publishing company. very small, but mine. I try to sign bands and find record companies for them. That is not easy and a lot of work but if I discover one day another band like Wolfsheim (I discovered them in 1987 and brought them to StrangeWays Records - unluckily I didn't try to get some money for it...nowadays everybody tries to get money for everything . When I started with all this I didn't even THINK about earning money with music !.The same with ARAGON RECORDS. It was always my dream to run my own label. Again: small, but mine. I run the German label ARAGON RECORDS and a friend of mine runs ARAGON RECORDS in Holland.

In 1998 you where marketing Gary Numan's new Album. I have heard he enjoyed the cover version of "Down In the Park", and loves the music of Girls Under Glass. What was it like working with him?

That was Volker when he was working for a promotion company. I never met Gary personally. I would like to...

You are friends with such bands as KMFDM and Die Krupps, which have worked on several remixes for you. How did you first meet them?

KMFDM are from Hamburg, so we met them on the weekends in clubs and so on... ...and we never met DIE KRUPPS, they just made a remix for us and got a lot of money for it. I tried to get in touch with them when they played in Hamburg, but I wasn't allowed to get into the backstage...so I don't know anything about them...

What are your future plans?

We want to play a concert on the russian spaceship MIR, but there are some logistic problems...

Is there anything you would like to say to the readers out there?

NO! I don't know them... o, wait a second... yes ! there is something : HAVE A GOOD TIME ALL THE TIME !!! (V.Savage) Thank you very much for your patience and apologies for my English!