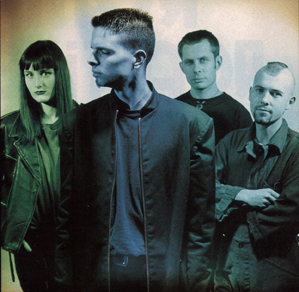 DHI: working with the Noise and chaos of everyday life

Although not about sunshine and lollipops Death and Horror Inc.'s (DHI)release Bitter Alloys Pressures Collide is like a breath of fresh summer air. While many musicians are trying to pass cliched power ballads off as "grunge", This Toronto based aggressive industrial trio works with the noise and chaos that invades everyday life. Vocalist / instrumentalist Vicar and keyboardist Graf say that while the band entered the studio with the songs already written at least two episodes of "interference" during recording have been immortalized on the disc. Lyricist Vicar was influenced by a violent beating he witnessed on his way home from recording one night and, on a lighter note, the sounds of the wedding hall and disco that flank the trio's rehearsal studio were integrated between album tracks. Vicar, Graf newest member, keyboardist Nocturne will be spreading the word across the nation this year.