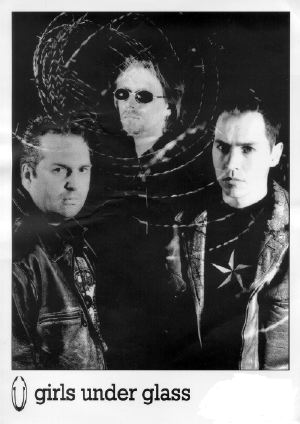 The alternative scene has changed much over the past decade; more and more bands have proved that their idea of crossing and melting different elements in music - from Metal through Electro -Trance to Industrial can be successful. The Hamburg, Germany based Girls Under Glass are leading innovators of musical openness and known for their overlapping mixture of styles since G.U.G's founding in 1986.

After twelve years and nine European releases (1988-1997) - Humus, Flowers, Positive, Live at Soundgarden, Darius, Christus, Down in the Park, Exitus, and Crystals and Stones - Girls Under Glass are still leading representatives of modern alternative music. This reputation has given G.U.G. members Zacharias and Ermes the chance to play an important role in the beginning of Cassandra Complex in 1990.

1997 brought the release of G.U.G.'s Firewalker in Europe which was considered by the media at the time as the toughest, most aggressive and uncompromising Girls Under Glass album to date, which continued to push the band far ahead of its peers in the Electro/Metal/Industrial and Wavescene with their unique multi influence and diverse style.

Now comes the long awaited Girls Under Glass anthology Nightmares - spanning over a decade of work with rare, and unreleased material,cover versions, remixes, and brand new tracks including a dance floor cover version of the seminal John Carpenter title Halloween.

The influence and importance of Germany's Girls Under Glass in the genre has garnered the attention of fellow countrymen and industrial giants KMFDM and Die Krupps both whom have remixed G.U.G. tracks that will be appearing on the first ever Girls Under Glass North American release on Van Richter Records.

Now the year is 2001 and the second and most ever anticipated U.S. release of Girls Under Glass... (one of the most influential Gothic / Darkwave and Industrial bands on the underground scene for the past two decades). This new compact disc contains the seminal Madonna hit title track Frozen (Ray of Light) remade in the GUG signature image. Bruno Kramm of Das Ich offers up a brilliant mix of the song "Wings", and the number one synth pop band in Europe - Wolfsheim - contributes with their compelling vocals on the dance track "Grey in Grey". Rounding out this great Disc is the Firewalker angst single "The Bitter End" Even though this new release is a mere thirty minutes in length it has six hugely significant songs on it with contributions from the premiere Artists in the darkwave,gothic synth pop and industrial genres. Frozen is a record that can seriously be considered as a more accessible NIN Broken!

Girls Under Glass goes back to its gothic and darkwave roots with their latest release entitled "Equilibrium". This album comes with the bonus Kraftwerk cover version "Radioaktivitat" by the GUG side project Trauma.

Back to GIRLS UNDER GLASS page.